Have you ever had one of those ideas that you really wished that you hadn't actually acted upon? 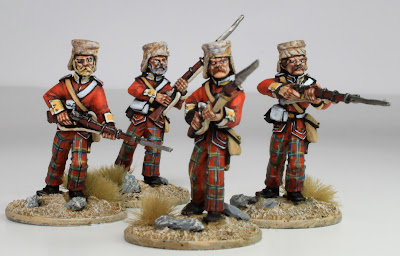 Well after an appeal for assistance in identifying the cameleers in the recent post, 'British Cameleers & a Thank You' it transpired that the chaps in question were most likely to be members of the 72nd, Duke of Albany's Own Highlanders.  After a little more research, I discovered that the 72nd Highlanders were one of the first of the 'de-kilted' regiments to readopt elements of Highland dress; in their case it was to be the rather splendid 'trews', in an entirely new tartan apparently designed on a sett worn by Prince Charles Edward Stuart in 1745.  'Eureka', thought I, what better regiment to base my 'Mutineer Miniatures', 'Scots in Doublets' on; oh poor simple soul that I am!

I should have realised that things were not going to go quite according to plan when, after base coating the 'wee lads', the resultant image led to a seemingly endless loop of Michael Jackson's classic, 'Thriller'.
I'm a big fan of the 'Mutineer Miniatures' work, but these have been my least enjoyable experience with them to date.  It's difficult to explain why but there was something about the pose and a few sculpting issues around the cuffs that left me bemoaning the whole task in hand.  When it finally came to the tartan itself, oh my goodness, what a effort this turned out to be!  Although I had reference in front of me, I was never entirely satisfied with the results.  I kept making some of the lines too thick, detracting from the overall effect I was looking for.

They are done now, and my thoughts?  Well seeing them photographed here, I'm not that disappointed with them, but will I pick up the command group on Saturday at 'Salute 2012'? We will have to see.