The 'Wilderness Camp' marks the completion of this latest little project that was heavy inspired by the wonderful 'Colonial Camp Set' created by 'Silver Whistle' over at 'Wargaming with Silver Whistle'. 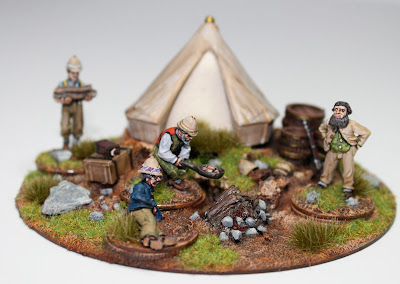 The concept was to create a base camp that could compliment the wonderful 'Perry Miniatures' American Civil War, Union camp set that I painted up to represent the cantankerous Professor Challenger and chums; characters from Conan Doyle's 'The Lost World'.

Although billed as a 'Wilderness Camp', a possible jumping off spot if you will for intrepid explorers, I was also mindful that I wanted it to be fairly generic so as to encompass other periods from late 19th to early 20th Century.  To that end the 'camp clutter' consists of various versatile items including 'Ainsty Castings', crates, 'Renedra' barrels and 'Empress Miniatures' Anglo-Zulu War accessories.  I also pressed four 25mm MDF bases in to the pumice gel to form character stands, allowing for a choice of miniatures rather than four permanently fixed ones. 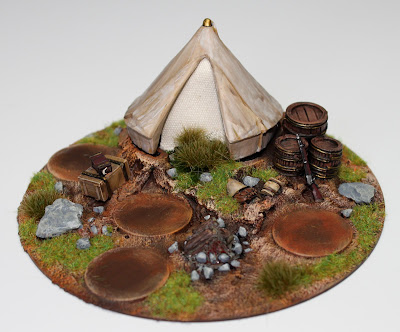 There is, however a little more to this camp site!  I have already credited 'Silver Whistle' with the initial conversion idea but there is another gentlemen who must be mentioned at this juncture, 'General Wilde' . 'General Wilde's Civil War in Miniature' (formally Captain Richard's) showcases some of the most imaginative and creative terrain I have ever seen, but in addition to this he often illuminates his pieces, bringing them to life, as it were.  So if you look closely under the bell tent you will see that the 'Wilderness Camp' is concealing a little secret. 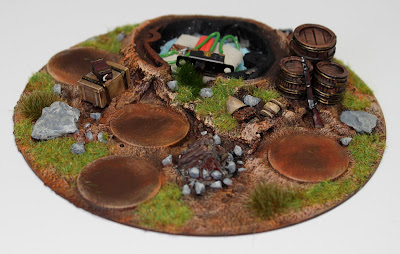 I've been desperate to have a go at this, simply because it looks so atmospheric and just damn cool!  I was determined that  this was the project to attempt my first illuminated work, but I was suddenly struck with the grim realisation that I had absolutely no idea as to how to achieve this!  I had gleaned some tips from the good 'Captain Richard' but was still mulling over the problem when a work colleague, Jemma, suggested actually casting the camp fire itself!
This, then, is exactly what I did.  A silicone mold was created of the campfire, then a small, red LED was set into clear resin.  Once everything was hardened a simple circuit was created, including the addition of a switch and a home made battery case (Jemma's idea again!).  I say simple, but this was actually my first attempt at soldering! 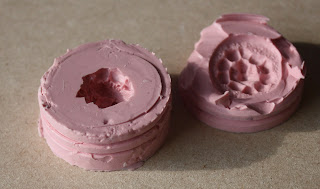 Once the circuit was complete and tested it was then buried under off-cuts of foam board, a liberal coating of pumice gel and 'camp clutter'.  The switch and battery were to be accessible by lifting off the tent and so this was not permanently stuck down, but instead a housing groove was created by simply pushing the tent into the foam board, creating an imprint. 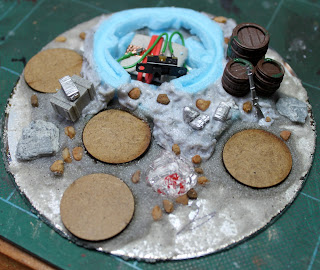 That was that; ridiculously fiddly, but great fun to do.  It was the following passage form Sir Arthur Conan Doyle's,  'The Lost World' that ultimately made me want to try this for myself:

"Well, suddenly out of the darkness, out of the night, there swooped something with a swish like an aeroplane. The whole group of us were covered for an instant by a canopy of leathery wings, and I had a momentary vision of a long, snake-like neck, a fierce, red, greedy eye, and a great snapping beak, filled, to my amazement, with little, gleaming teeth. The next instant it was gone—and so was our dinner. A huge black shadow, twenty feet across, skimmed up into the air; for an instant the monster wings blotted out the stars, and then it vanished over the brow of the cliff above us." 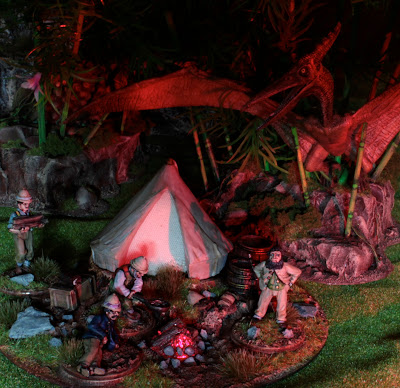 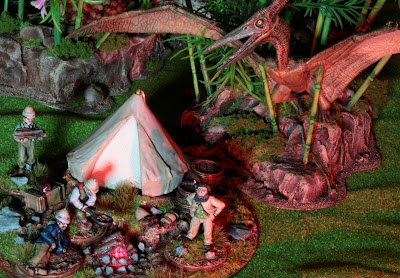 A hugh thank you should go to 'General Wilde' for his inspirational work and in you haven't seen it before  then head over to 'General Wilde's Civil War in Miniature' to see for yourself, you will not be disappointed.
Pterodactyl by Papo

What a wonderful day this has turned out to be; not only is the inspirational 'Captain Richard's Miniature Civil War' reinstated to the blogosphere but '28mm Victorian Warfare' made it onto an honours board!  Thank you to everyone that posted comments or have subsequently linked the post elsewhere.  I am absolutely delighted that you all liked it. 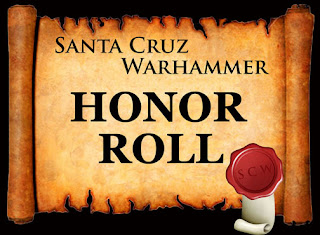 Still giddy that I made it on to 'Honor Roll 55' thanks chaps at 'Santa Cruz Warhammer'.
Posted by Michael Awdry at 08:14