“It’s behind you!” I just don't seem to be able to get enough of these wonderful 'Copplestone Castings' sculpts; they are just so much fun to do.  The latest off the painting queue are these 'Dinosaur Hunters'. 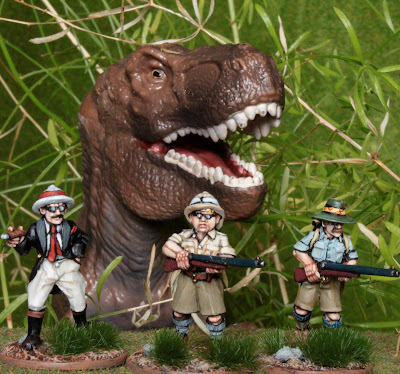 I love the fact that they have such a 'human' quality to them; there are no over devloped biceps or futuristic weopany.  In fact three more unlikely Dinousaur Hunters it is hard to imagine!  In the photographs below, fans of 'It ain't half hot, Mum' will find it hard not to draw comapsions between the chap on the left and Gunner 'Lofty' Sugden, played by  Don Estelle.  The slightly more 'rugged' fellow in the middle could have stepped out of the pages of an H. Rider Haggard adventure.  As for the Cuban, wielding gentleman on the right, let us just say,
“Hooray for Captain Spaulding!”

Just for those who might be unfamiliar with the references alluded to, have a look at these short clips and see what you think.  Just as a brief aside, T-Rex was by Schleich toys, but more of them a little later!