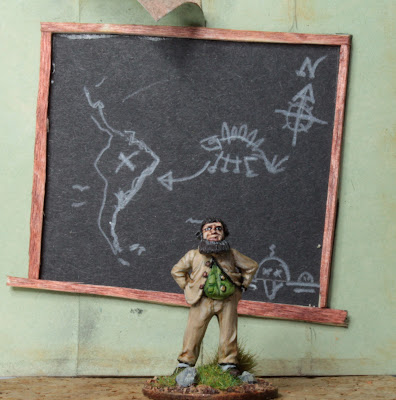 One of the greatest aspects that I have come to enjoy about blogging is the sharing of ideas.  This little group  came about as a direct result of a wonderful post over at 'Wargaming with  Silver Whistle'.  The post entitled, 'Colonial Camp Set' was such an inspiration that I was determined to have a go myself!  I ordered up the 'Perry Miniatures' American Civil War, Union camp set and had in mind to replicate what 'Silver Whistle' had done with his.  It was about the same time that I had picked up a copy of Sir Arthur Conan Doyle's 'The Lost World' and was first introduced to the memorable character that is George Edward Challenger; I knew straight away that I had to try a create the man himself with his intrepid team of explorers.


Deciding which of the 'Perry Miniatures' was to represent each of the four adventures from the story became rather straightforward; Edward Malone the enthusiastic young reporter for the Daily Gazette is now returning with logs for the fire, Lord John Roxton, adventurer and big game hunter stretches out languidly beside a camp fire while Professor Summerlee can be see preparing the vittles.  For all three, I simpled followed 'Silver Whistle's' example and snipped off the kepis, replacing them with 'Empress Miniatures' pith helmets.  I knew I wanted something a little different for Professor Challenger and drew inspiration from the words of Conan Doyle himself.  The character of Ed Malone on his first meeting with Challenger describes the Professor as follows;

His appearance made me gasp. I was prepared for something strange, but not for so overpowering a personality as this. It was his size, which took one's breath away - his size and his imposing presence. His head was enormous, the largest I have ever seen upon a human being. I am sure that his top hat, had I ventured to don it, would have slipped over me entirely and rested on my shoulders. He had the face and beard, which I associate with an Assyrian bull; the former florid, the latter so black as almost to have a suspicion of blue, spade-shaped and rippling down over his chest. The hair was peculiar, plastered down in front in a long, curving wisp over his massive forehead. The eyes were blue-grey under great black tufts, very clear, very critical, and very masterful. A huge spread of shoulders and a chest like a barrel were the other parts of him which appeared above the table, save for two enormous hands covered with long black hair. This and a bellowing, roaring, rumbling voice made up my first impression of the notorious Professor Challenger.

Rooting around the loft space of 'Awdry Towers' I happened across a box of 'Games Workshop' Empire Knightly Orders; another long forgotten project that never got off the ground!  Curiosity getting the better of me I soon discovered, languishing on a dusty, plastic sprue the perfect 'bonce' for this great man!  Much drilling, sanding and swearing later and it was attached, but it needed something more.  Putting aside my irrational fear of 'putty pushing'  I reached for the ubiquitous 'Green Stuff' and before I knew it the great G. E. Challenger was reborn! 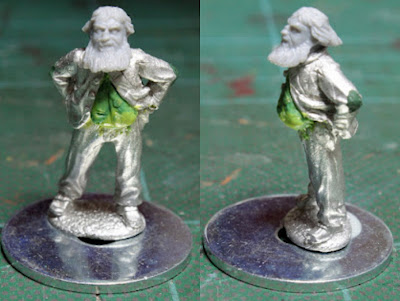 All that remained was to give them all a paint job that gave the impression of eccentric British explorers up to their necks in danger, but resolute enough to stop for tea and tiffin. The wonderful Perry sculpts gave me every opportunity to instill little 'Britishness' into each of the characters; finally, with the addition of a little more 'Green Stuff' around  the helmets I hoped to sell the illusion of a puggaree.  Once again a big thank you to 'Silver Whistle' for the initial inspiration and I would encourage anyone to venture across to 'Wargaming with  Silver Whistle' and have a look for themselves at his wonderful blog. 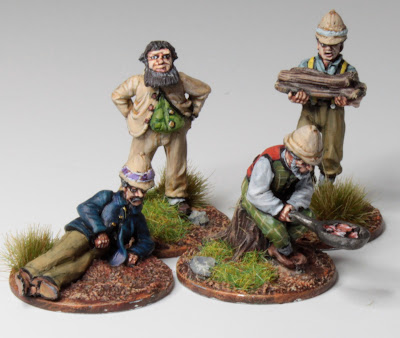 Below is a photograph used as the frontispiece to the 'Lost World' in 1912.  From left to right we have, Ed Malone, Professor Summerlee, Professor Challenger (Conan Doyle dressing up again!) and Lord John Roxton.  Not an entirely unfavourable comparison in the end and great fun to do; just need to finish off their base camp now!
Posted by Michael Awdry at 08:59