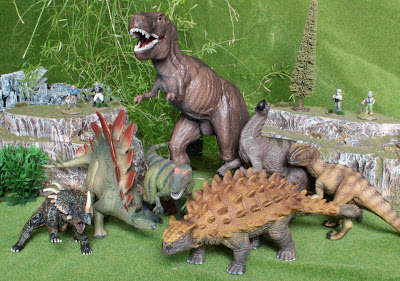 It will not have escaped the attention of those who pass by these inane ramblings, masquerading as a wargaming blog, that there has been somewhat of a major twist in direction!  The year had started well with both the Crimea and Anglo-Zulu Wars revisited with some success, but an apparent fixation with 'Pulp' style adventures and prehistoric beasties has seen the author go beyond the pale!  Well this post is devised with the sole purpose of putting these concerns into perspective.  One of my targets for the year was to actually 'play a game' and to that end various rule sets have been purchased including the sumptuous 'Black Powder' and the skirmish driven, 'Triumph & Tragedy'.  The problem is that been such a novice, even these most playable of rule sets sees me scratching my head and wondering, 'what on earth is going on?'  I am not a member of a club and so the initial 'jumpmg off' point needs to be some form of solo or role playing game.  Scrabbling around for an idea I chanced upon 'Tooth and Claw',  but again found that I needed something even simpler and as luck would have it came across '2HourWARGAMES'; this has my name written all over it; simple, quick and very light hearted.

With the distraction that has become known as '28mm Tales of Adventure'    (it even got its own 'ident' link on the sidebar!  The image gleaned from the wonderfully 'pulp' artwork of the 'Spicy-Advnture Stories from the 1930s.) the idea of playing a game entitled 'Adventures in the Lost Lands' seemed like too good an opportunity to miss!  The discovery of 'Copplestone Castings' has been a Godsend with regards to miniatures that I would need, but I was somewhat apprehensive about the dinosaurs.  This is really only meant to be the briefest of distractions, to build self confidence and gain a basic understanding of gaming dynamics.  Investing huge amounts of time and money into prehistoric beastliness is not part of the master plan - yes there is a plan... somewhere!  A couple of well spent hours trawling around the infoweb brought the answer; and it was plastic! 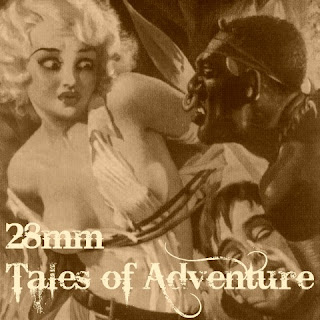 'Oh my Goodness!' Things have certainly moved on in the toy dinosaur market from when I was a lad, just look at what you can now get with your pocket money!  There is no end of well sculpted, often well painted plastic 'Dino fun' to be had and I've taken this opportunity to share a few with you here.  Perhaps a little out of scale, but given that this is only meant to be a minor distraction and all about having fun, who cares?  (With regards to scale, some of the 'Schleich' models have a plastic figure around their neck to indicate the scale between humans and dinosaur; not too far away from a 28mm miniature!) 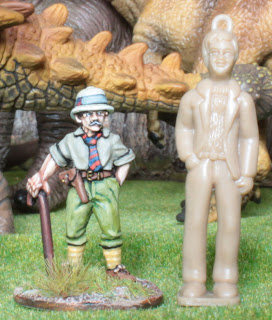 I'm afraid that this most recent of distractions is presenting itself as an itch that needs to be scratched!  Nonetheless it should allow me to return to my beloved Victorian era with the confidence required to move all my projects forward with a clearer understanding of what is required.  Well that is the plan anyway!


Just as a very brief aside, the 'Provost Marshal' on a recent inspection of the troops here at 'Awdry Towers' , dropped into the conversation, "and you know what the spikes at the end of a Stegosaurus' tail are called don't you?"  He said it in such a way that I was instantly convinced that I should know the answer to this, after all the loft space of my parents' house still groans under the weight of long forgotten tomes on dinosaur lore!  For the life of me I couldn't recall the name... "Thagomizer".  Yes 'Thagomizer', a great name and if you believe the story it was coined by the great Gary Larson in a 'Far Side' comic from 1982.  The name was appropriated by the scientific community and is now a recognised 'informal' anatomical term!  You just can't make this stuff up! 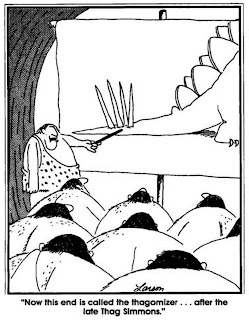