Enough of making resolutions, time to get back to work!  And my word I've made hard work of this project, which originally started when a good friend, often referred to as the 'Provost Marshal', presented me with over thirty 'Wargames Foundry'  British  Cavalrymen.  It had been his intention to use them to represent the regiments that made up the Light Brigade on that fateful day when they charged the guns at Balaclava. 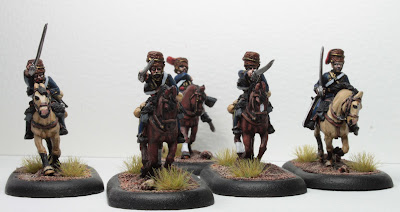 So with the final addition of the 8th King's Royal Irish Hussars we have closure - or do we?  Whilst it is true that the original miniatures have now been completed perhaps it would be only fitting to order up some artillery for them to charge.  Then, of course there is a command group, perhaps even some Chasseurs d'Afrique.  To make matters worse I understand that Warlord Games are about to release some 17th Lancers sculpted by none other than Paul Hicks; I'm doomed!
Still at the very least then this chapter is complete and for those that missed the saga develop feel free to click on the TITLE of the photos below, that should take you to the relevant posting.