"Tipped with a line of steel" 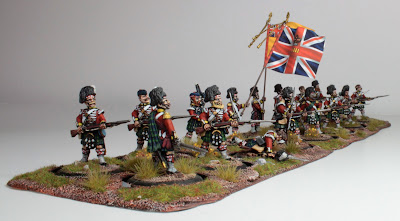 During the Crimean War, the 93rd Sutherland Highlanders formed part of the Highland Brigade that distinguished itself throughout the campaign.   However it was at Balaclava that the regiment won immortal fame when, under the command of Sir Colin Campbell, it formed line in two ranks and repelled a charge of Russian cavalry.  Campbell is reported to have said, "There is no retreat from here, men. You must die where you stand." Never has a regimental motto, 'Sans Peur', (without fear) been more appropriate as the men stood firm against the thunderous advance of the advancing Hussars.

It was the London Times correspondent, William H. Russell who wrote that he could see nothing between the charging Russians and the British except "the thin red streak, tipped with a line of steel". Russell was of course referring to the 93rd Highlanders; they were the only unit standing between the Russian cavalry and an unprepared and disorganised British camp.  British Army tactics of the time would have dictated that  the infantry stand four deep to present a rolling volley of fire.  Furthermore, to have received  a cavalry charge in the open they would normally form into a square to protect themselves; cavalry could easily break a line of infantry!  Why was it then that Sir Colin Campbell stretched his men into only two thin ranks? 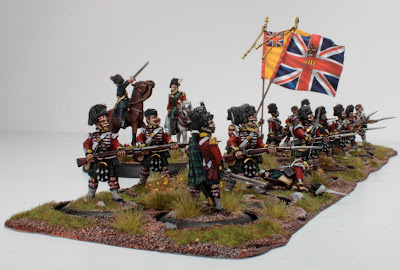 Shortly before the charge the Highlanders were coming under artillery fire; clearly  the best form of defence for this would be an extended line and not huddled together in a square!  In fact rather than surrender a tactically advantageous position Campbell had had the Highlanders lay face down below the crest of the hill effectively making them invisible.
Campbell was an experienced soldier and undoubtedly would have realised the importance of his position; he would have been  fully aware of the need to spread as far as possible in a bid to cover more ground, protect the camp and present more firepower per volley.  Although there are conflicting reports it is believed that the 93rd fired three volleys, the first at such a range that it had little effect.  The second and third, however, delivered such withering fire that the Russian Hussars checked and ultimately turned, breaking off the charge.  So elated where the Highlanders that some began to mount the famed Highland counterattack only to be met by a fierce Campbell roaring, "Ninety-third, Ninety-third , damn all that eagerness!"

Throughout the project I was becoming more and more acutely aware that I had been naive in basing the miniatures as individuals.  This was simply a lack of experience and understanding on my behalf.  Now a little older and potentially wiser I’ve constructed the following dynamic movement trays that allow me to place the miniatures in whatever alignment suits their use best.  I can take very little credit for the idea, which I have appropriated from a wonderful posting on the ‘Gentlemen’s Wargames Parlour’ that can be found here.
A huge thank you to James at 'Oshiro Model Terrain' who sorted me out with laser-cut Perspex rings to my specification.

Interesting fact: The Argyll and Sutherland Highlanders (now known of 5 Scots) are the only infantry regiment in the British Army to have "Balaclava" in their list of battle honours. 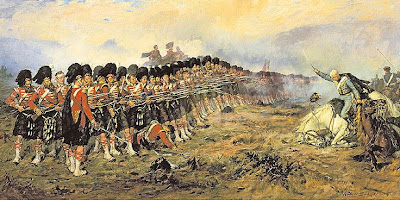 It is only right and proper to acknowledge the painting that has in turn inspired the miniatures that are posted here.  Robert Gibb was an Edinburgh born artist, who in 1881, created one of the finest military paintings of the nineteenth century; certainly in my humble opinion anyway! ‘The Thin Red Line’, was inspired by Alexander Kinglake's account of the 93rd Highlanders at Balaclava in his book ‘The Invasion of the Crimea’.   It is alleged that Gibb had taken a walking holiday in the English Peak District during which time he was reading Kinglake's book.  One afternoon while out walking near Haddon Hall, he glanced up to a slight rise and imagined that he saw a line of burly highlanders, "all plaided and plumed in their tartan array."  On his return to his lodgings, Gibb sketched out his mental image and the rest, as they say, was history.
Posted by Michael Awdry at 15:11