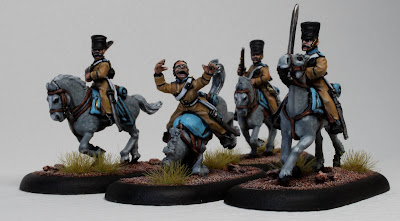 This latest instalment in my Light Brigade project tells the tale of the fifth columnists that were found lurking within the ranks of the brigade.  While painting what I thought was to become a member of the 4th Light Dragoons and applying colour to the cuffs I was suddenly aware that the shape was not as I had previously encountered. It looked to all extents and purposes like a dragoon as he was wearing a dress shako but interestingly there were no gold cord cap-lines.  A little more research and it was clear that I was not painting a dragoon but a Russian Hussar!  Having not progressed much further than the skin tones and a blue base coat I decided to repaint the figure as it was intended but had little reference to hand.  There was a very small photograph on the `Foundry’ website and a little more in my Osprey, ‘The Charge of the Light Brigade’ but that was about it, unless of course you consider the following exchange from the 1968 movie, ‘The Charge of Light Brigade’ directed by Tony Richardson; 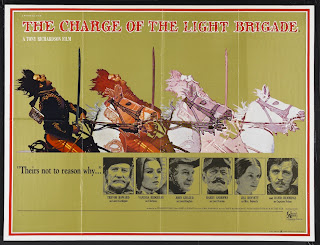 Officer: What colour is the Russian enemy?

In the end I went for what I hoped represents a Hussar from the Ingermanland Regiment who on the day formed part of the command of Lieutenant-General I. I. Ryzhov.  A quick roll call discovered that there were in fact another three of these sneaky Russians hiding within the ranks.  This was not necessarily a problem until it came to their mounts; a little web-based research had unearthed the fact that the Russian cavalry had a rather distinctively shaped blanket! 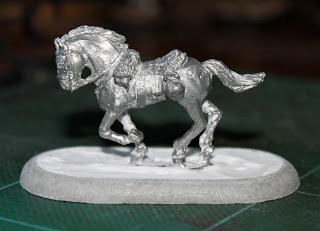 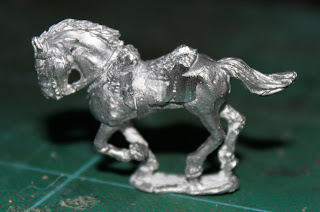 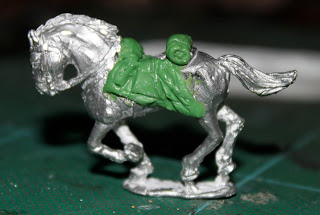 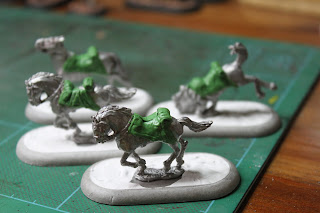 I decided to avoid the embarrassment of contacting ‘Foundry’ and asking if they would sell me four Russian styled horses from their Crimea range and instead thought that I would be able to undertake the conversions myself.  Things had progress reasonably well as I hacked off hay bags and blanket rolls and then came my nemesis- ‘green stuff’.  oh how I hate this stuff of green;  I see so many wonderful examples of conversions undertaken with this most malleable of substances but every time I have ago I end up with fingerprints everywhere and bits stuck where they shouldn’t be.  Still I persevered until I had produced something that I felt was reasonably passable.  I had all but completed this modest little unit when a horrible and sickening thought crossed my mind; I had painted the riders and now the converted horses but hadn’t stuck the two together, more importantly I hadn’t checked to see if the extra blanket and of course the extra girth would effect the riders’ position on the horse!

Now that you've all stopped laughing I can tell you that it did and that there was a very nervous couple of minutes as I gently tried to prise apart the legs of my Russian Hussars – not a phrase that I every imagined myself to write down!  Finally completed all I now need to go a track down the missing Dragoons.
Posted by Michael Awdry at 13:20