"There is no retreat from here, men. You must die where you stand." 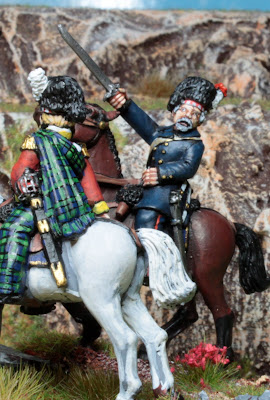 The immortal words spoken by Sir Colin Campbell to the 93rd Highlanders as they prepared to receive the Russian cavalry's charge  at Balaclava.  Campbell had been appointed as the commander of the Highland Brigade of the 1st Division under the command of the Duke of Cambridge; the Division consisting of the 42nd, 79th, and 93rd Highlanders.  His first engagement, during the Crimean War, was at the battle of the Alma, where he led his brigade against the redoubt which had been retaken by the enemy and overthrew the last columns of the Russians. 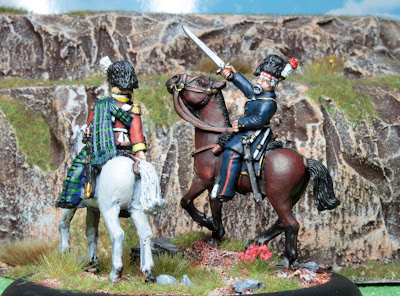 Leading from the front Campbell was so impressed with courage of the Highlanders at Alma, that after the battle the only reward he asked for was permission to wear the highland bonnet instead of the cocked hat of a general officer.  This permission was duly granted and he started sporting a specially commissioned plume, the top third red in honour of the 42nd and bottom two thirds white for the 79th & 93rd. 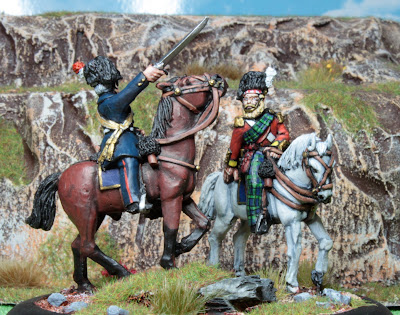 More from Great War Miniatures' Crimean range and rather lovely they were too, although I have to admit I was a little anxious at first given that horse and rider were a one piece sculpt.  I decided to base the two together forming a command stand but raised Campbell's miniature a little higher using a piece of slate in deference to his seniority. 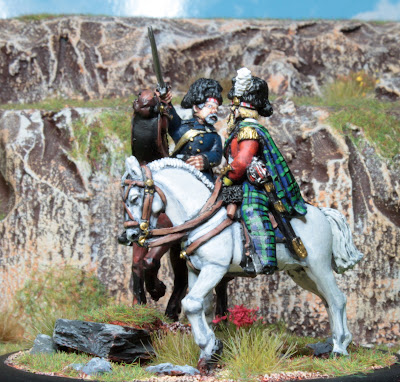 Below is Roger Fenton's portrait of Sir Colin Campbell (for more Fenton information may I respectfully direct you to a previous post entitled, 'I'm ready for my close up, Mr. Fenton') depicting a man clearly feeling the strain of the position of office that he holds.  The lines of concern and anxiety are heavily chiseled across his forehead.  On the 9th April 1855, Fenton wrote of him: "Sir Colin Campbell I have not yet got; he is up at four every morning and either writing and not to be disturbed, or scampering about". 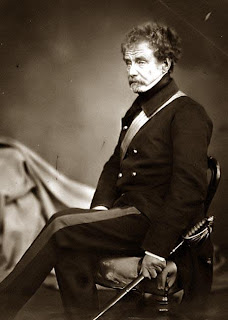