As Quiet as the Grave

A suitably apt title I felt given the subject matter but it also  reflects the complete like of activity on my behalf of late!  It has been an incredibly busy couple of weeks at work with early starts and late finishes and I'm afraid I've been feeling a little bereft of sleep and without energy enough to even pick up a brush.  I must also apologise as I haven't even had the time to trawl around many of the blogs that I enjoy following but will certainly be looking to make amends in the forthcoming days.
Following on from the Doctor Who Adventures Weeping Angels giveaway, I felt inspired, by many of the comments made on this blog, to use them in a 28mm graveyard terrain piece.  As I was mulling over how this might come about I found myself in the 'Orc's Nest' in London where I came across the Renedra plastic grave stone set.  Two sprues of plastic headstones and crosses numbering over forty pieces including two crows, perfect.  Rather than make an unwieldy grave yard at this point in time I opted for two smaller stands that could be placed wherever I wanted them on the table and that star of the show was to be my weeping angel. 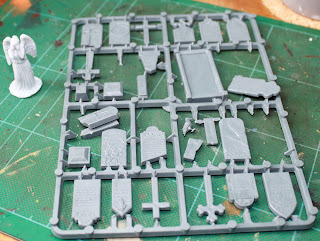 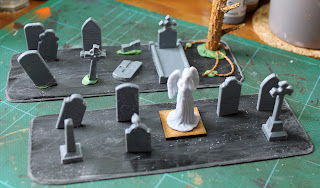 The actual build is really simple, two pieces of plasticard, roughened to allow the glue to key, headstones fixed with glue or green stuff.  I cut down a couple at the base to produce a jaunty angle and included a piece of abandoned Christmas tree for a tree stump. Using a little household filler to give a little texture to the terrain it was simply covered with a sand and P.V.A. mix followed with a few additional stones and then all primed black.
I used the same colours for the headstones and angel as listed in the previous post, namely  Games Workshop 'Shadow Grey', Vallejo's 'German Cammo Beige', 'Iraqi Sand' and 'Silver Grey'.  These were all simply dry brushed.  It was then just a case of adding static grass and tufts where appropriate. 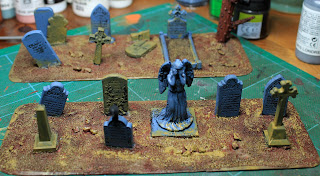 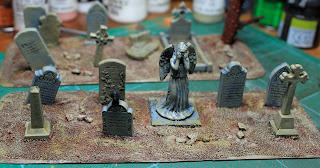 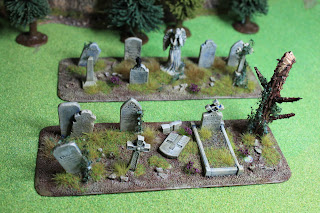 The final build showing the two separate stands complete with another purchase from the 'Orc's Nest', Army Painter's poison ivy.