As Dead as a Dodo? 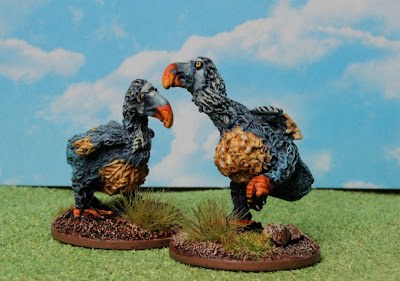 What could be more Victorian than a Dodo?  How naive I am!  Whilst I was aware that the bird was extinct (not much gets past me!) I had always assumed that it had 'ceased to be' relatively recently, certainly in the 1800s  making it fair game for my somewhat eclectic collection.  After all the Dodo appears in Lewis Carroll's 'Alice's Adventures in Wonderland', published in 1865 and what's more he has a wonderful command of the English language!  So it was, that when I came across these fabulous creatures (albeit a little pricey) at 'Black Cat Bases' whilst looking for some urban bases for my zombies, I just had to have them.

So how was it that I had managed to get the story of this metre-high, flightless bird from the island of Mauritius so wrong?  The popular image of a fat and stupid creature surely derives from the celebrated painting of the Dodo by Jan Savery (1589–1654). This painting, of 1651, hangs in the Oxford University Museum of Natural History and with the only remaining Dodo skull and claw (both can still be found on display) there can be little doubt that they inspired Lewis Carroll, an Oxford mathematician,  to create his own fictional version for 'Wonderland'.

Interesting Fact:  Lewis Carroll's real name was Charles Lutwidge Dodgson; it is said that he had a stammer and struggled to pronounce his own name, "Do-do- dodgson".  Unsurprisingly then, that he was particularly fond of the Oxford Dodo. 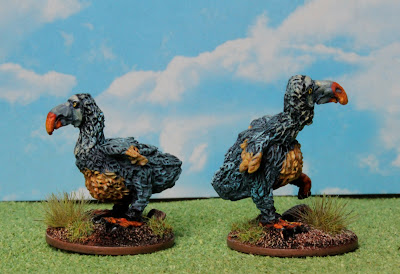 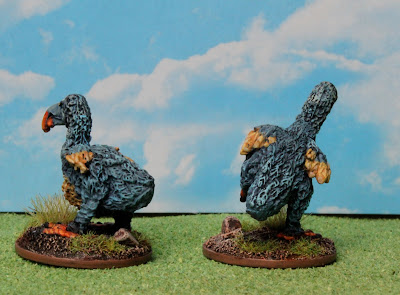 The Dodo then is perhaps the most famous extinct species of the planet. Its first contact with Europeans was not the Victorian era, as I had believed, but in fact in 1598, when a Dutch expedition landed on the island of Mauritius, off the East coast of Africa.  The Dodo, having not previously met the beastly European before, was entirely fearless, and this (not to mention the fact that it couldn't fly!)  made it easy prey.  Of course whilst the Dutch sailors were chowing down on Dodo between voyages they inadvertently let loose other species that hastened the demise including rats, pigs and dogs all of whom plundered the Dodo nests that were constructed on the ground.  Mind you the deforestation of Mauritius for its ebony will also have helped destroy a previously unmolested habitat.  Although there is no exact date for the unfortunate passing of this species it is widely accepted that by 1690, just 40 years after European settlers arrived, there were no Dodos left on the planet. 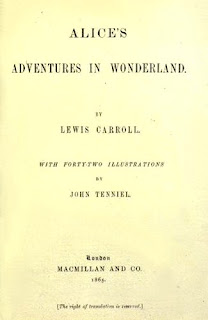 `In that case,' said the Dodo solemnly, rising to its feet, `I move that the meeting adjourn, for the immediate adoption of more energetic remedies--'
`Speak English!' said the Eaglet. `I don't know the meaning of half those long words, and, what's more, I don't believe you do either!' And the Eaglet bent down its head to hide a smile: some of the other birds tittered audibly.
`What I was going to say,' said the Dodo in an offended tone, `was, that the best thing to get us dry would be a Caucus-race.'
`What IS a Caucus-race?' said Alice; not that she wanted much to know, but the Dodo had paused as if it thought that SOMEBODY ought to speak, and no one else seemed inclined to say anything.
`Why,' said the Dodo, `the best way to explain it is to do it.' (And, as you might like to try the thing yourself, some winter day, I will tell you how the Dodo managed it.)
First it marked out a race-course, in a sort of circle, (`the exact shape doesn't matter,' it said,) and then all the party were placed along the course, here and there. There was no `One, two, three, and away,' but they began running when they liked, and left off when they liked, so that it was not easy to know when the race was over. However, when they had been running half an hour or so, and were quite dry again, the Dodo suddenly called out `The race is over!' and they all crowded round it, panting, and asking, `But who has won?'
This question the Dodo could not answer without a great deal of thought, and it sat for a long time with one finger pressed upon its forehead (the position in which you usually see Shakespeare, in the pictures of him), while the rest waited in silence. At last the Dodo said, `EVERYBODY has won, and all must have prizes.'
`But who is to give the prizes?' quite a chorus of voices asked.
`Why, SHE, of course,' said the Dodo, pointing to Alice with one finger; and the whole party at once crowded round her, calling out in a confused way, ` Prizes! Prizes!'
Lewis Carroll, 'Alice's Adventures in Wonderland' 1865
Posted by Michael Awdry at 11:42