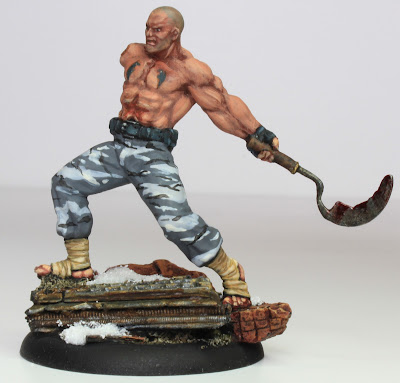 I present, for your delectation, just a single miniature this morning, but what a fearsome lump of lead!  If truth be told, I've been putting off working on Mr. Sickle for a while now, as not only is it a considerably larger model from the 'Knight Model' stable, but acres of rippling muscle are not my favourite thing to paint simply because there is nowhere to hide. 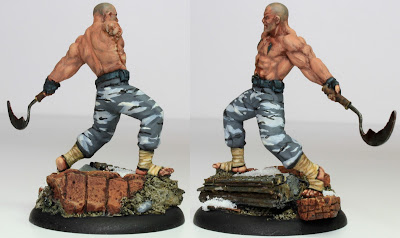 A bizarre abominiation, legend has it that Mr. Sickle was one half of a conjoined twin performing in a Russian circus with his brother Mr. Hammer.  Their brutality brought them to the attention of the Joker, but only needing a 'right hand man', the clown persuaded them to be separated before callously discarding Mr. Sickle.  Now a Lieutenant in the Penguin's crew, Mr. Sickle has come a long way from the small Siberian village of his birth. 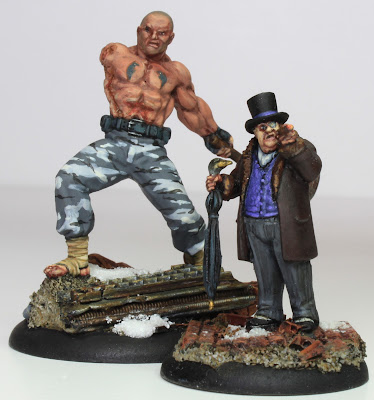 Fortunately, for yours truly, a relatively simple miniature to put together with just his sickle hand requiring a pin, again based on an 'Element Games' resin 'old factory' base.*   Having made a rod for my own back with the camouflage trousers used on the other crew members, this detail clearly needed to be carried through here with the addition of some tattoos to represent his affiliation.  A formidable addition to the crew, Mr. Sickle will surely have the Batman running for the shadows?