…or Gotham Zoo to be more precise! 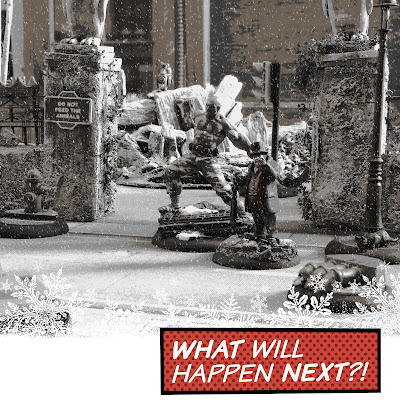 Sunday saw the Penguin's nefarious actions curtailed by the arrival of the Caped Crusader; he can be so tiresome!  Having spent far too long tinkering with the terrain, I was still trying to read the rules when Mike 'The Dark Templar' Reynolds* knocked at the door.  Not having much experience gaming, I find reading rules particularly difficult as all the jargon, lists and numbers seem to overwhelm me.  This is why I was exited at actually putting the 'Batman Miniature Game' into context by playing a game, but at the same time determined to have  fun!

*His post of the day can be found HERE, including a rather splendid picture of the Penguin!

I have no doubt that we got things wrong including the positioning of loot markers and forgetting that firearms wound on a +2 but this was meant to be a learning exercise and sure enough as the game developed the sound of laughter increased.  I watched in dismay as the Batman swung effortlessly from building to building and groaned incessantly as yet another magazine of high velocity shells was seemingly emptied into thin air!  This was the experience that I was hoping for and wasn't disappointed.

We played one and a half games, the Penguin snatching the first by hiding behind buildings counting his loot, but the second saw the Batman, and elements of Gotham's finest, show just what could happen if you got things wrong amassing an unassailable victory posits tally by the end of turn three!  So where does all this leave us?  I clearly need to spend some time re-reading the rules to become more familiar with certain phases of the game.  Having downloaded the free version of the rules, I was finding myself scrolling through them on my iPad trying to find the relevant page as Mike was explaining what he was doing.  As a result, I was becoming quite flustered during these phases and so just took the opportunity to stop and watch what Mike was doing.  The other thing, I need to do is build a bigger crew!  Two hundred rep points was perfect for what we were trying to do, but the second game just highlighted how important victory points were; I just couldn't close quickly enough to keep in the game.  I made some fundamental errors early on and should have used Sickle as a bullet magnet sending him straight down the road to distract the Police from lifting the loot**  Royal Penguin, didn't manage to land a shot all game, but proved a constant threat especially with his added grapple gun allowing him to take up positions on the rooftops.  Penguin Emperor was a disappointment and with hindsight I would have been better off taking a couple of lesser thugs to reach and hold objectives.

**Should the Police be allowed to hold the the loot?  We did briefly discuss the ethics of this action, were they on the take?

What was lovely was seeing Mike's jaded opinion of the game change over the course of the day so I'm hopeful that we might persuade him, and of course Bull's Joker crew, to return to the mean streets of Gotham in the near future.