Top of the Fops!

As the excitement and merriment of Salute 2012 begins to fade into recesses of time I find myself drawing parallels, between the ever increasing lead pile and the stratum that make up sedimentary rock formations of a long forgotten era. Just as in those layers one would occasionally come across anomalies that just looked out of place. One such nugget of substance was this ‘Bicorne Miniatures’ ‘Connoisseur’ creation representing the ‘oh so flamboyant’ Marshal Murat. 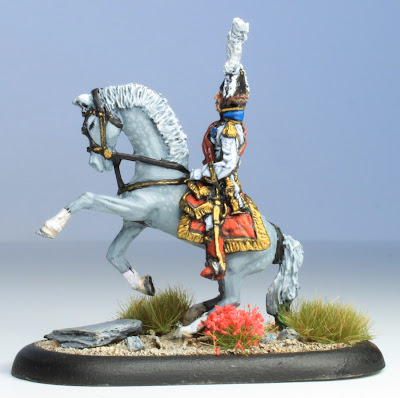 Now, I knew that I hadn’t purchased him and through a more vigorous interrogation process it transpired that, my good friend, the ‘Provost Marshal’ had decided that it was high time that I got around to painting something from his favoured Napoleonic era (a cunning little ruse indeed!) and had slipped this gift into my swag bag. So not wishing to seem ungrateful, Monsieur Murat has made and earlier than expected arrival at the head of the paint queue. 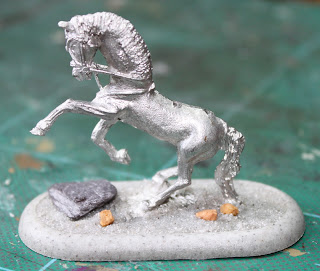 The first thing I need to point out is that this was a completely different standard of sculpting to those that I’m more familiar with, such as the likes of ‘Empress’ and ‘Mutineer Miniatures’. It harks back to a day when anatomy could be brushed aside in favour of aesthetic and was all the more charming for it. This was most notable in the case of the charger who appeared to have an almost serpent like quality, particularly around the neck! 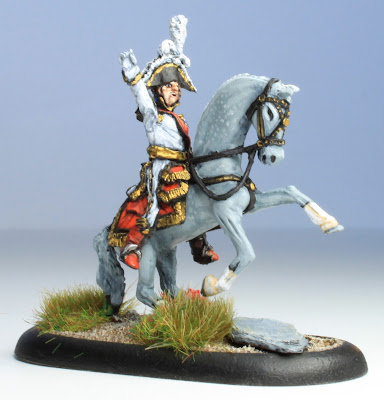 Armed as I was with copious amounts of reference material from the ‘Provost Marshal’ (Mrs Awdry, looks suspiciously at any bags he now brings into ‘Awdry Towers’!) I set about the miniature with more enthusiasm that I thought possible; it would appear that a change really is as good as a rest! That said it wasn’t too long before I was bemoaning the intricacies of Napoleonic uniforms and wondering if I would have enough gold paint to finish the job; the man really liked to show off!
Finally done I have to admit that the experience wasn’t all bad and I might (I stress the might!) be persuaded to have another go at a General or command stand in the future; something I know will bring a smile to the ‘Provost Marshal’s’ face. In the interim it seemed only appropriate to invite the good man to give a potted history on this, his favourite, flamboyant fop!


The following information was generously provided by the 'Provost Marshal':


One of the most celebrated and flamboyant cavalry commanders in history, Joachim Murat is as much famed for his taste in uniforms as for his exploits in battle. Born the son of an innkeeper in 1767, he was destined for the Church, but an encounter with a cavalry regiment led his life to a kingdom and eventually to a firing squad.

An early supporter of General Bonaparte, he brought up the guns for the “whiff of grapeshot” which saved the Revolution in 1795. He became Bonaparte’s ADC in Italy – later becoming cavalry commander, and then followed him to Egypt – being one of the select few who returned to take part in the coup d’etat of 18 Brumaire.

In 1800, Murat hitched himself to First Consul Bonaparte’s star by marrying his youngest sister Carol ine. It was a happy marriage, but the brains of the couple was clearly Carol ine, who devoted the rest of their married life towards garnering further titles and riches. 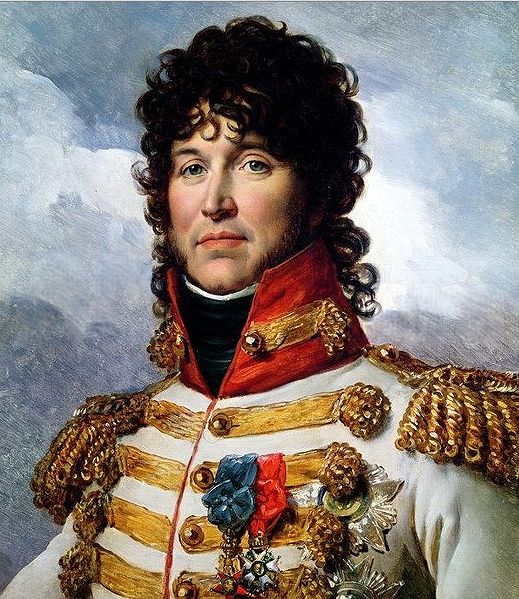 In 1804, he was named second in the order of seniority of the Marshals of France, followed over the next few years by an increasingly grandiose set of titles – Grand Admiral (it is hard to think of a less suitable candidate than the ultimate cavalryman), Prince of the Empire, Grand Duke of Cleves and Berg and ultimately in 1808, King Joachim of the Two Sicilies (Naples and Sicily).

Throughout his many battles, Murat led from the front – often armed with a gold riding crop. He was present at Marengo, Austerlitz , and led the pursuit after Jena . His most spectacular charge was at Eylau in 1807, where he charged at the head of 10,500 horsemen in the middle of a blizzard. In Spain as the Emperor’s lieutenant, he savagely put down the Madrid uprising.

He took part in the 1812 campaign as cavalry commander, and when Napoleon left the Grande Armee, Murat was left at its head. He soon returned to his kingdom leaving the army to its frozen fate. Together with Carol ine, he started intriguing with the Allies to save their own positions, and after Liepzig - his last battle with Napoleon – took no part in the 1814 Campaign of France.

Following Napoleon’s fall in 1814, the Allies turned on Murat. He offered his services to the returned Emperor in 1815, but was rebuffed. He then marched against the Austrians, but was defeated at Tolentino. Fleeing to Corsica , he tried to emulate Napoleon by returning to his kingdom. He was captured in Calabria and ordered to face a firing squad on 13th October 1815. Waving away a blindfold, he kissed a cameo of Carol ine, and gave the troops a final order “I have braved death too often to fear it – Soldats, Faites votre devoir, droit au coeur mais epargnez le visage, Feu!” (Soldiers, do your duty, straight at the heart, but spare the face, Fire!).

Murat’s taste in uniforms was legendary. He designed many of them himself (often featuring his favourite colour - amaranthe). This is a relatively subdued one – a version of the standard Marshal’s tunic, but in white rather than blue, worn at the Battle of Heilsberg in 1807 . As the Empire continued (and Murat’s social position grew higher), the uniforms became more and more outlandish, this also coincided with a decline in his military prowess. In Russia in 1812, a number of his baggage wagons contained ostrich plumes for his many hats! Napoleon on more than one occasion had to reprimand him over his uniforms, once referring to him as a Franconi (a famous circus rider). At another time he dismissed Murat telling him to return to his presence dressed as a French Marshal.

Undoubtedly brave, and a soldier’s soldier, Murat cannot be described as a great strategist. General Savery wrote that “it would be better for us if he (Murat) was less brave and had a little more common sense." Perhaps the last thought should lie with Napoleon who on St Helena suggested that had Murat handled the French cavalry at Waterloo , the outcome might have been different.