If you go down to the woods today...

You're sure of a big surprise! 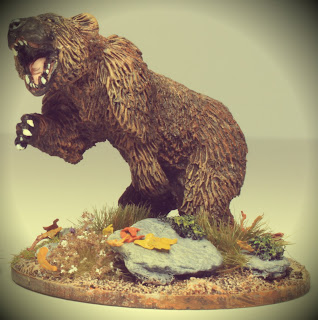 More fur covered beastliness from the North American wilderness.  Once again they are from 'Trent Miniatures', 'DeeZee Miniatures Prehistoric Range' and again bought through the magnificent, 'Arcane Scenery and Models'. 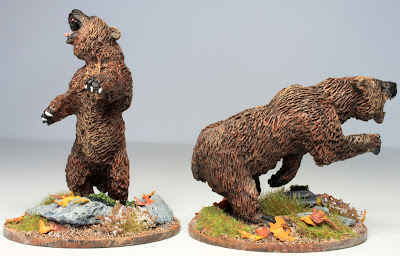 This time dubbed 'Cave Bears' which were said to have become extinct around twenty seven and a half thousand years ago, but mine are hopefully going to pass for big 'Brown Bears'.  Once again I'm hopeful that they will form part of a 'secret project' I'm working on; now when I say 'secret', what I really mean is that I've not thought it through properly and have once again fallen afoul of 'Shinybloodyitis!' 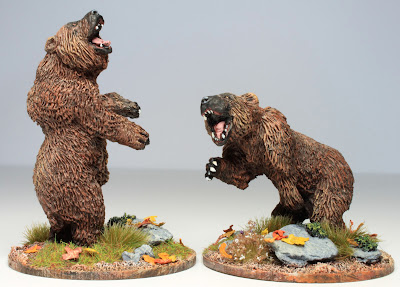 Back to the bears - great, weighty sculpts and relatively easy to paint up; mostly dry brushing and a bit of detail work.  Given that they were quite straightforward I decided to have a bit of fun with the basing.  I've been looking for an excuse to try out a tip highlighted by the wonderfully talented Michael from 'Ministories'.  He had in turn spotted a great 'How To' on the 'Massive Voodoo' site for using the foam packaging that comes in the blister packs with our miniatures as moss.

This is really simple to do, but wonderfully effective.  Cut and stick to where you want your moss and when dry just tease at it with a pair of tweezers to make it more irregular.  Paint up as you like, but in my case I went for a rather conventional palette of green. 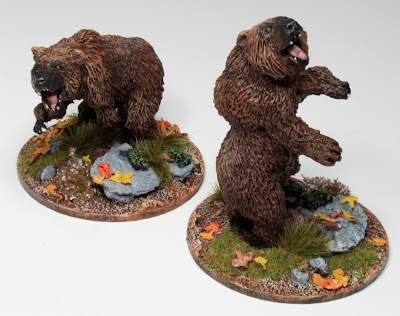 Given that these 'big ole' fellas are likely to found in the woods I reached for one of my 'Salute' purchases;  'Antenocitis Workshop's' Decor Plus - Autumn Leaf.  Tiny little leaves coloured to represent, well Autumn leaves!  Pure, unadulterated showboating, but I love them!