It is difficult to explain why I find Max Brooks’ story telling so enthralling; the subject matter has always been a bit of a guilty pleasure, after all working in an environment that looks to uphold values such as compassion and consideration to others one doesn't expect to take enjoyment reading about the obliteration of the undead in the most violent manner imaginable!
The sheer ludicrous idea that there could ever be such a plague of flesh eating ghouls does not prevent us from trying to imagine how we would cope in such a situation.  Telling ourselves, no doubt, that we would be the ‘oh so cool' Samurai sword wielding hero of 'Steve and Fred', the second of the four short stories served up in 'Closure Limited'.
That, I feel, is where the genius of Brooks’ storytelling lies; it is the believability of the tales that draws us in.  The incredible attention to realism and detail that catches us unawares and makes us suspend all notion of disbelief.  Each of these stories could so easily have been developed into a much larger concept, but Brooks just leaves us, mouths agape, staring at the last page.

This is a justifiable four crown collection of stories, it would have been more, but there is simply just not enough book to warrant it and just as in the brilliant, ‘World War Z’ I find myself wanting more!

The curiously addictive world that contains all things zombie seems to have really taken hold here at 'Awdry Towers'.  Not only has the paint queue been infiltrated by them ('Surf's Up!', been a case in point) but for some unfathomable reason I found myself ordering these bizarre delights from 'Candy Hero'. 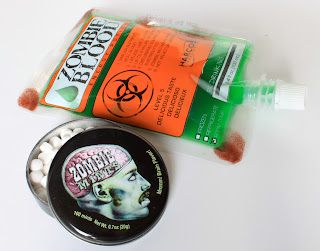 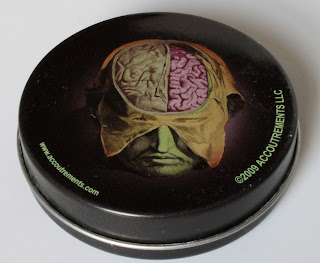 Zombie blood energy drinks are all well and good, but it was the zombie mints that piqued my curiosity.  I was drawn in by the wonderful tin but 'Brain flavoured mints' are wrong on so many levels!