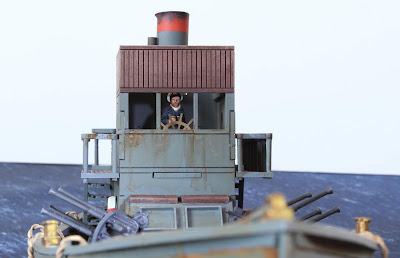 With the the 75th Anniversary of D-Day safely negotiated and James' triumph of a lecture to the school done, I have time to reflect on a couple of other pieces that went into making the project such a success.  During his research, James kept coming across reference to at least two German gunboats that were involved in the action around Pegasus Bridge.  If you look into this, and trust me we did, there are conflicting accounts as to what they might actually have been.  A common thought was that they were civilian trawlers requisitioned by the Kriegsmarine and fitted out as Flakships.  The Vorpostenboote, as they were known, were a common sight around coastal areas and so we thought it highly possible that these might have been the boats referred to in the eyewitness accounts. 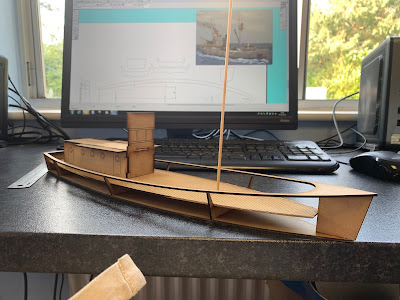 "We could build some", said James.  This was becoming an all too familiar cry at this stage and I have learnt that the best thing to do in these situations is to buckle up and enjoy the ride!  We didn't have an awful lot of reference material to work with, a few grainy photographs care of the info web, was seemingly as much as we could hope for.  By chance, James stumbled across a picture of a 20mm scaled armed German Trawler available from 'Grubby Tanks' and now with a pre-conceived idea of what he was aiming for, off he went!

Within hours the prototype was produced and it was already apparent to me that this was going to be a bit of a showstopper.  James was really enjoying the design process, but also the idea of minimalising waste, designing his drawing to fit on to one sheet of 2mm MDF. 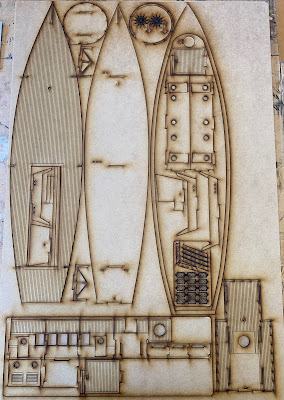 James very kindly put the basic carcass together for me, cut himself a second boat, and so it was that we parted for the Easter holidays.  With the boat safely docked on the painting table, I was suddenly faced with all manner of decisions to finish off the project.  There was so much delicious detail to work with when it came to painting, but I still had a couple of things to fix first. 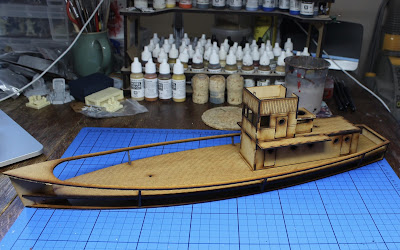 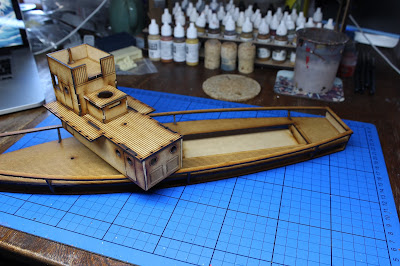 The forward gun platform required the addition of some cocktail sticks and these were also employed for the bridge's hand rail, with the addition of some plastic strip.  The plastic wasn't an ideal fix, but at this stage I was considering adding flak barriers made from Milliput so wasn't unduly worried. 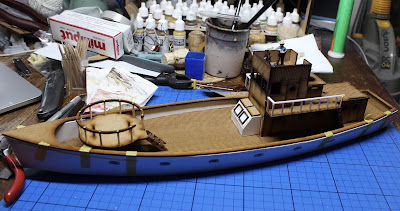 I fashioned a hold hatch out of mount board, which was also used for the hull.  Whilst I had the Milliput out, I considered the idea of adding some rope fenders.  These were to be attached using the wire hoods found on Prosecco corks, but just couldn't get the right shape and so resorted to wooden beads instead.  I salvaged some resin chandlery from the bits box along with some oil drums.  A pole for the ensign was fixed and with the addition of some armaments from the very reasonably priced 'Anyscale Models', the basic construction was complete. 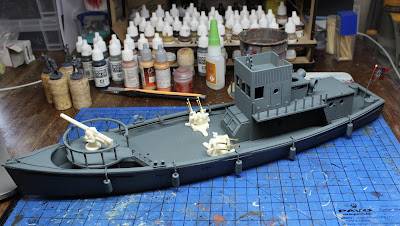 It was at this point that we had to return to school and compare homework, so to speak.  James had fashioned a funnel from some copper pipe, heating a ball bearing to force into one end to create a beautifully fluted look.  He had very kindly done one for me and I managed to persuade him to cut some additional pieces for the handrail following my abortive Milliput episode.  We also discussed the gun emplacements and deciding that I was going to use my boat for all manner of pulp adventures, quite fancied the ability to swap out the pieces as required.  In no time at all James had cut discs capable of holding magnets to facilitate this very idea. 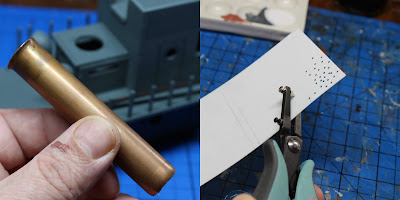 With some final flourishes, including a ship's whistle and a liberal smattering of rivets, the build was complete and the boat was given its final base coat. 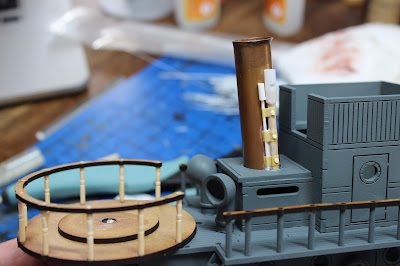 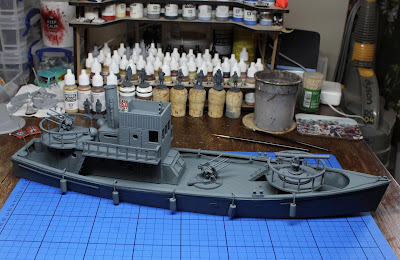 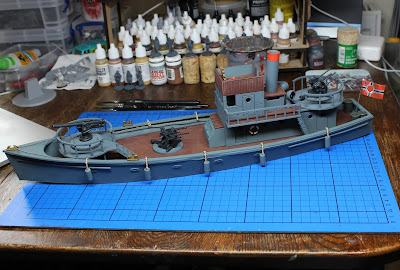 I stared to carefully pick out the various details in colour and was thrilled with the progress, but something didn't feel quite right.  It wasn't until the night before we had arranged to photograph the entire model that I realised what it was that was troubling me - the boat was too clean!  Weathering is always a concern, when does it become too much?  Still resolved to give it a go, I started working in around the areas I thought would be caught first. 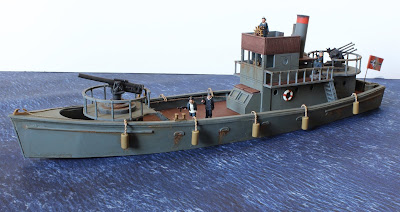 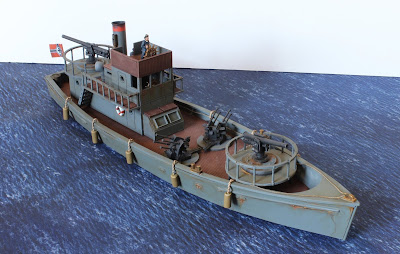 So with the boat completed the crew, from 'Artizan Designs', were able to step aboard and my Vorpostenboot set sail for Pegasus Bridge. 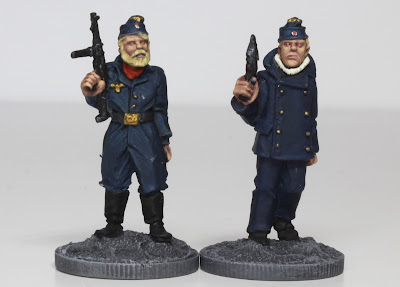 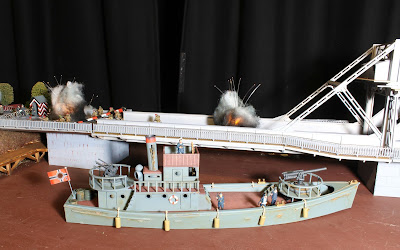 This was such a joy to work on and once again, I can't thank James enough for his generosity.  I am thoroughly looking forward to seeing how this marvellous model will be put to use in the future. 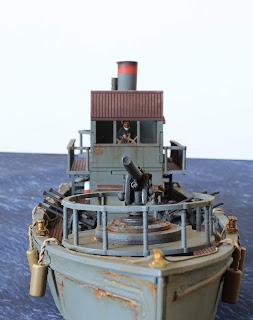