So with our Table Top Gaming club up and running at school and the Bushido board starting to take shape we were enjoying learning the rules with the Tengu Descension and Prefecture of Ryu Starter Sets.  Both these clans have impressive qualities to them and the models really were lovely, but I started to think about getting my own faction in play.  Now I think it is fair to say that I am not a good wargamer insomuch that I lack patience and will often charge in, committing my troops to engagements that they clearly have no chance of winning in a bid to get things moving.  So when it came to choosing my own faction, I was looking for something mischievous, something that didn’t necessarily play by the rules – enter the Savage Wave! 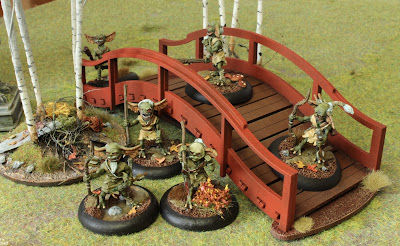 A cursory look on the GCT Studio's website told me all I needed to know, goblin like beasts that flooded around a big bruiser of a monster, surely that would work for me?   Quoting directly from the company’s website:

They take the form of evil creatures of myth and folklore. From where they come or why, no-one knows, but one thing is for certain, the wave crushes everything in its path. The Oni and Bakemono demon-creatures that make up the bulk of the Savage Wave appear bent on the destruction of humankind and all that is holy, but they are not mindless – as many opponents have found out at great pain, the Savage Wave is cunning and organized, and it operates according to its own weird and unknowable logic.

With the starter duly ordered and unpacked, my heart sank!  I had had some experience with pinning and fixing small pieces with my Penguin Crew from ‘Knight Models’, but staring at me from the remnants of the packaging were a multitude of small parts, I just didn’t know where to start, let alone comprehend pinning such small individual pieces together. 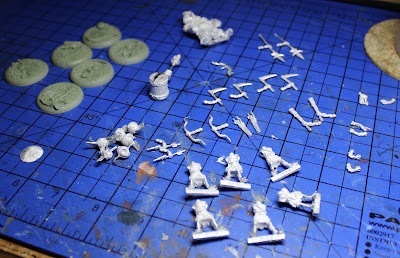 A chance conversation with Mike ‘The Dark Templar’ Reynolds saw me invest in some superglue gel and start to think about where the stress points were going to be for each model.  By gluing not just where each limb attached to the body, but considering allowing the limbs to rest on other parts of the body, I could increase the number of contact points and possibly negate the need for pinning altogether; at least that was the theory.  To add to my woes I had decided that I wanted the bases to be a little special, in this case a forest theme, and had ordered up some ‘Fenris Games’ resin bases.  Of course this meant more cutting and pinning, I really am a glutton for punishment!  Having procrastinated for a good while, I finally got around to starting and was pleasantly surprised at how well they went together.  The starter set came with enough pieces to make six Bakemono either Archers, Bushi, Spearmen or Beaters.  I had decided not to use the Bushi parts, which with hindsight might be a mistake, but I suppose that I could always add some more in due course.

So safely constructed and primed it was time for a lick of paint and now with built miniature in front of me, I couldn’t fail to notice a striking similarity to the protagonists of the 1984 film, ‘Gremlins’.  Now channelling my inner Spike, I tried to mimic some of the colouring in my own little band.  I imagined that the Bakemono weren’t particularly fashion conscious and so went for muted, sombre colours as if from the earth.  So with a little gore and poison tipped arrows they were done. 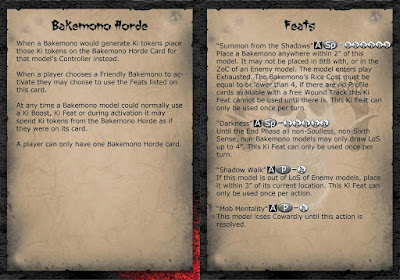 How have they fared?  Well the Bakemono are weak, but their strength lies in numbers and having the ability to 'Summon from the Shadows' or move around unencumbered in the dark is definitely good fun.  What they need, of course, is a powerful ally and this is where my Oni comes into his own, but more of that in a later post. 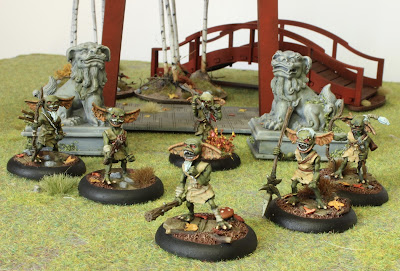 SaveSave
Posted by Michael Awdry at 08:30

Email ThisBlogThis!Share to TwitterShare to FacebookShare to Pinterest
Labels: Bushido