There have been a good number of terrain projects on my 'to do' list for a while now, but one that kept getting pushed back was the ubiquitous hedgerow.  I can't explain why, probably because I could envisage what I wanted, but just couldn't justify purchasing them when scouring pads seemed to work just as effectively for everyone else. 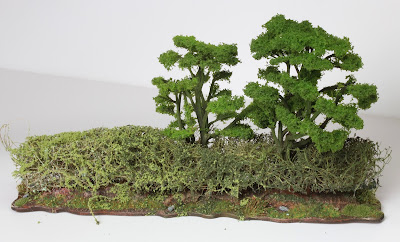 The problem, a little like the coir mat for the 'Fields of Gold', is that whilst effective as a hedge substitute, I was't keen on the look of the humble scourer and wanted something a little different.  Who knows how exactly one's Google Fu is channelled, but some days it just turns up, smiles sweetly and says, "these are the hedges you have been looking for".  This, then, is my search for suitable shrubbery! 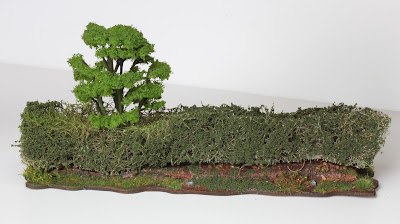 'Jim's Wargames Workbench' had been running a series of terrain building posts, one of which showcased some splendid MDF templates, a quick exchange of ideas led me to 'East Riding Miniatures' where a pack of couple of packs of their medium field boundaries templates are ordered and with outstanding customer service arrive in good order.* 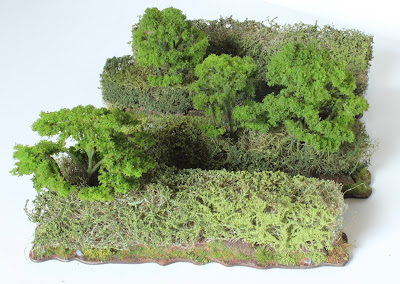 Meanwhile, I had also seen a series of exceptional posts by Pat of 'Wargaming with Silver Whistle' fame where he had used all manner of foliage, tufts and armatures to create some of the most stunning wargaming terrain you could wish for - certainly something to aspire to.   Pat also listed the various products used and so a I followed his lead and made an order to the '4D Model Shop'.** 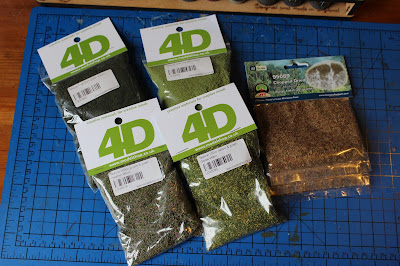 **Not a company that I had used before, but once again great service and consequently somewhere I will be returning to.

There has also been a great deal of interest of late in cheap model trees from China, coincidentally I had also made an order, purely out of interest really, and had been surprised at how quickly they had arrived, in my case approximately ten days, and how how versatile they were.  Versatile enough to be promptly banished to the 'projects when I have more time' pile and instantly forgotten about.  It wasn't until I stumbled across another inspirational post, this time by Simon Quentin of 'Brummie's Wargaming Blog' that I decided to dig them out and dust them off. 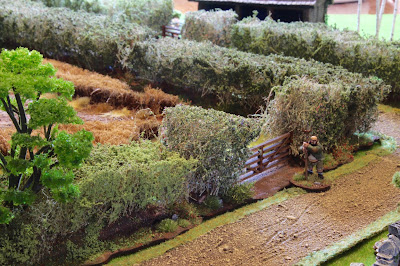 Simon had used some of his cheap plastic trees and incorporated them into Post-Apocalyptic scatter terrain, with one particularly effective idea being a tree growing through an abandoned car.  This was the final piece of inspiration that I needed to begin 'Operation Hedgerow' and the requisite parts were duly assembled. 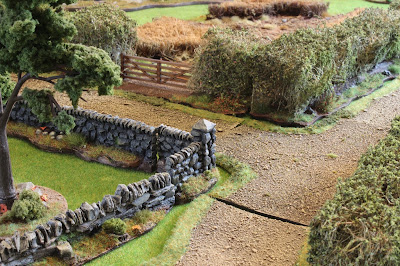 Just before commencement, I had one final trawl around the info-web for visual stimulus and it was here that I discovered that there is rarely an original idea left to us hobbyists.  As luck would have it I arrived at the 'Random Platypus Forum' and lo and behold there was the best 'Hedgerow making tutorial' you could ever wish for.  A gentlemen of considerable skill, Levied Troop, had documented his technique for creating just the sort of vegetative border that I was after and interestingly enough it turned out that it was actually him that had designed the original MDF templates that I had picked up at the beginning of this journey! 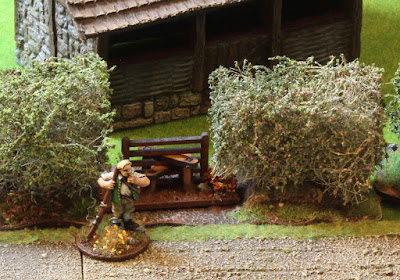 So I present my humble efforts made by following the tutorial with very little deviation from the original script.  It really was very straightforward, but needed the benefit of a couple of days of undisturbed hobby time and some good weather to dry out the plaster/PVA mix in good time.  Imitation, certainly in this case, is the sincerest form of flattery and all that remains is for me to thank the aforementioned and esteemed gentlemen whose creativity has all contributed in bring this project to fruition. 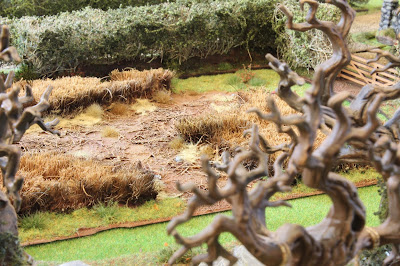