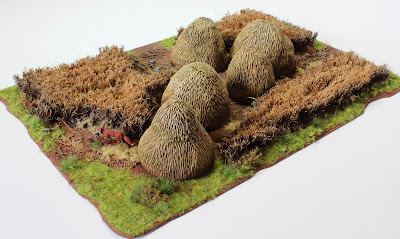 I was gifted some hobby time this weekend and decided that the priority should be to finish off the wheat field fashioned from a coir door mat.  Having undercoated the base work in black, I simply applied colour using cheap acrylics sourced from 'The Works' discount shop before successive dry brushing brought the desired effect.  Some of the encouraging comments from the previous post made mention to hay or grainstacks and as luck would have it I stumbled across some rather splendid resin versions when picking up some bits of MDF from 'Warbases'.  With their typically excellent service, I had them delivered, primed and painted in no time at all and all that remained was to flock and add a 'Tajima1' tuft or two. 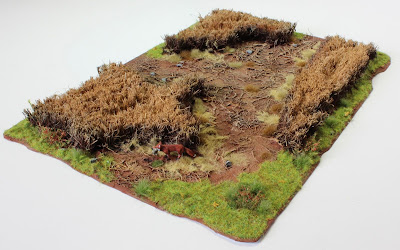 The resin haystacks add a little variation to the piece insomuch that I can have them on the field making the terrain slow going or removed to give easy access along the cleared paths.  I couldn't resist adding a little something extra in the shape of a 'Warbases' fox, proudly returning from the hunt with its quarry firmly clamped in his jaws.  As I was taking the photographs, I suddenly realised that I had, in fact, created two fields.  The initial section of mat that I had originally discarded as being too 'mat-like' actually worked rather well well when positioned alongside the harvested version.  A quick dry brush to match the two together and the illusion was complete - two for the price of one.  Now onto 'Operation Hedgerow'! 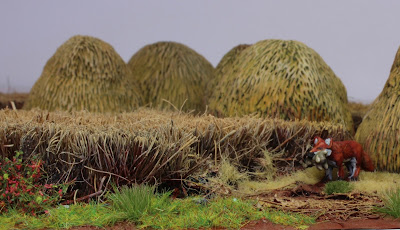 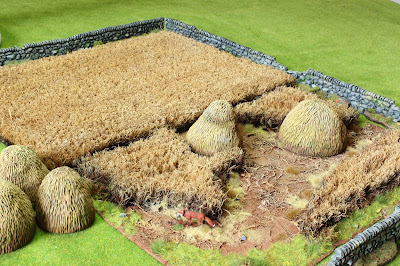