Well there's shameless, attention grabbing title that I couldn't have envisaged writing a couple of weeks ago!  The '28mm Tales of Adventure' distraction continues apace with this contribution from 'Otherworld Miniatures'.  I am laying the blame for this purchase squarely at the feet of my good friend the 'Provost Marshal'  who seems to take far too much delight in finding these distractions for me.  That said I knew that as soon as I saw it it that I just had to have one. It certainly was a rather splendid sculpt and the intention was to paint him as a fairly generic constrictor, ideally representing the great Amazonian Anaconda, but I'm not sure I should have spent quite as much money on him as I did! 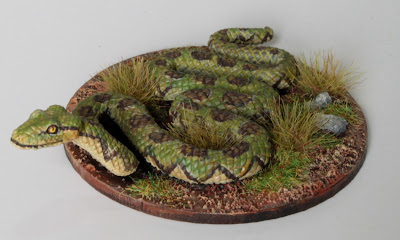 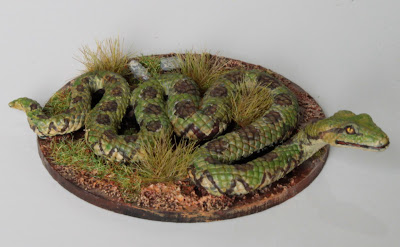 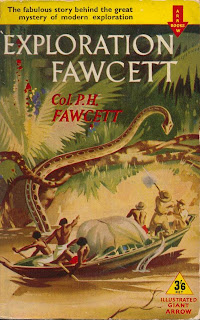 In 1907, whilst on one of his many South American expeditions, Colonel Percy Fawcett (for more information see the post on 'The Lost City of Z') reported seeing, and shooting, a sixty two foot Anaconda.  He is said to have 'fired at the object until smoke filled the air'.  As the canoe, the party were in, pulled alongside the body, Colonel Fawcett pulled out his knife, apparently with the intent of selecting a sample of skin.  As he cut into the creature it jolted towards him resulting in the party fleeing in fear!

The following advice is actually an urban myth, purporting to be from the US Government Peace Corps Manual for its volunteers who work in the Amazon Jungle. This, then, is what to do in case you are attacked by an anaconda:
1. If you are attacked by an anaconda, do not run. The snake is faster than you are.
2. Lie flat on the ground. Put your arms tight against your sides, your legs tight against one another.
3. Tuck your chin in.
4. The snake will come and begin to nudge and climb over your body.
5. Do not panic.
6. After the snake has examined you, it will begin to swallow you from the feet and - always from the end. Permit the snake to swallow your feet and ankles.  Do not panic.
7. The snake will now begin to suck your legs into its body. You must lie perfectly still. This will take a long time.
8. When the snake has reached your knees slowly and with as little movement as possible, reach down, take your knife and very gently slide it into the side of the snake's mouth between the edge of its mouth and your leg, then suddenly rip upwards, severing the snake's head.
9. Be sure you have your knife.
10. Be sure your knife is sharp.
‘28mm Victorian Warfare’ and by association ‘28mm Tales of Adventure’ cannot be held responsible in any way if this doesn’t work!
"Did you bring your knife?" 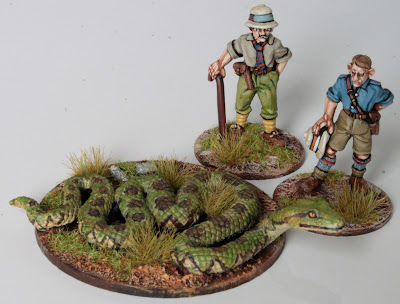 WARNING! Those of a delicate disposition should think twice about viewing the following video entitled, 'Huge Dead Snake'; you have been warned!
Posted by Michael Awdry at 09:59