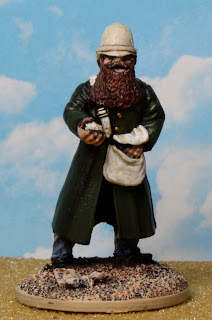 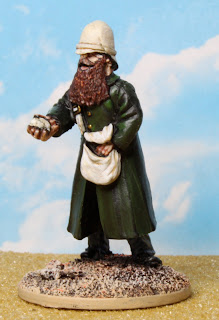 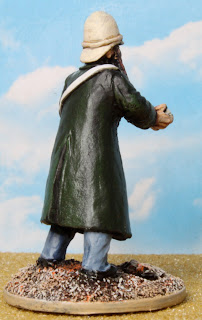 This simple, but rather splendid miniature is part of 'Redoubt Enterprises' Zulu War range and a welcome addition to my growing Anglo-Zulu War collection.  Chaplain George Smith had accompanied Centre Column to Rorke's Drift.  This Tall man, with a great red beard, was seen distributing ammunition to the men from a haversack all the while exhorting them not to swear throughout the battle.  His black, civilian coat was said to have faded to green.  He can be clearly seen in Alphonse de Neuville's painting entitled the 'Defence of Rorke's Drift', painted in 1880.  The artist has chosen to depict the dramatic evacuation form the hospital for his theme but has rather condensed the time frame for the sake of dramatic effect. 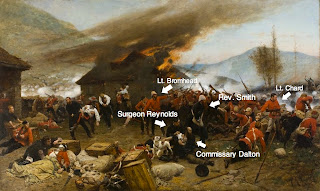 Now interesting enough I may have found mention of the Reverend Smith being a tall man, but it would appear that he was more like a 'giant of a man', just look at him in comparison to some of the other characters from the battle; you certainly get your money's worth with Redoubt!