Following on from this morning's post I thought I would share a few more recently edited snaps from our day at the medieval festival at Herstmonceux castle.  So taken, as I was, with the exploits of the 'Compagnie of Seint Barbara' I couldn't help but post a few more examples of the wonderful level of detail they went to in order to bring to life the role of the 'gunners' on the medieval battlefield. 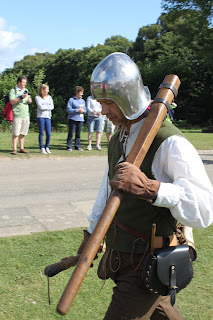 This hand gunner is making his way to the starting position for the morning's siege of the castle.  Fast and dangerous, he is not encumbered by the plate armour many of the men-at-arms were wearing.

During the afternoon the the 'Compagnie' treated us to a demonstration of the beautifully and authentically created field pieces.  It was here that we learnt where the possible derivation of the phrase, "have a care" comes from.  Apparently this would be yelled by a gunner before setting the fuse in order to warn those who might be about to open their powder cases or perhaps be just be a little too close for comfort! 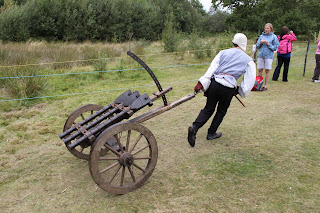 The Triple Barrel Ribiquald or 'Trinity' as she was called heading back to the camp after the demonstration.  Dating from about 1460, this early breech loading weapon was capable of shooting somewhere in the region of eight rounds per minute.  A short ranged but fearsomely devastating weapon that would be the last thing you would want to see having successfully charged over the drawbridge! 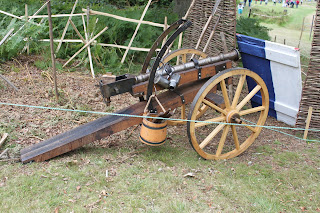 Back at the camp we were able to get up close and personal, with members of the 'companie' on hand to answer any questions you might have. 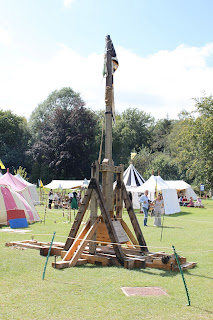 The mighty trebuchet, another working replica albeit this one scaled down a little, was in action in the morning's siege.  Several projectiles were effectively launched but I have no doubt the 'sappers' were under strick orders not to actually breech the walls - the current owners not been best pleased! 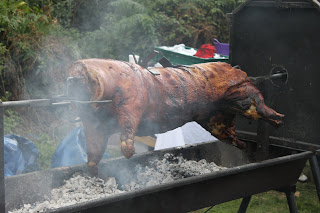 Excitement over it was time for lunch at the 'Buxom Wench'!
Posted by Michael Awdry at 18:25