Final Flight of the Storch 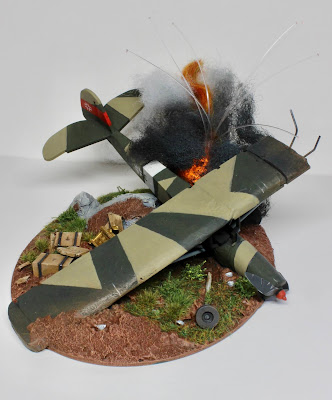 Regular readers to this most humble of weblogs might remember the Storch diversion?  'The Flight of the Storch' detailed the creative genius of James in designing and building a 1/56 scale Fieseler Storch in response to my whim of having something littering the lower paddock of the castle.  James, always true to his side of a bargain, successfully completed the design and built several prototypes, but then project was rather buried, with boards and miniatures taking priority.  It was never truly forgotten, however, and I am delighted to finally present its realisation for your delectation. 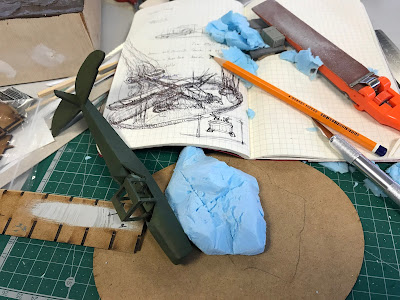 The concept, whilst fanciful and indulgent, centred around a crashed German plane, possibly looking to escape from the advancing Allied forces, overloaded with Nazi gold.  I should stress that this was a complete fabrication and that there is no evidence, whatsoever, that a certain Austrian Schloss holds the secret to the last resting place of the Ark of the Covenant!  Utilising a particularly arduous Head of Departments meeting the final design was sketched out and construction began in earnest. 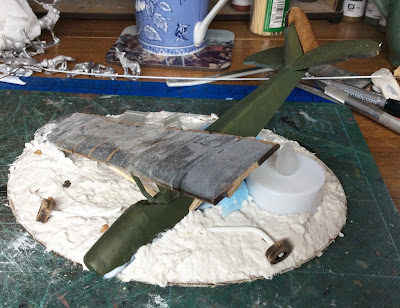 The project took a massive leap forward when James, very kindly, donated one of the prototypes that he had been working on.  The fuselage was already complete and so it really was just a matter of 'crashing' it into a base of Sculptamold.  Cocktail sticks, plastic rod and scraps of blue foam were all employed to good effect and I left a tea light shaped space so that a re-worked blast marker could be incorporated for good measure.

The final flourish, so to speak, were the disgorged looted treasures.  A quick rummage of the bits box unearthed some suitable packing creates along with the Ark itself, a 'Crooked Dice' Maguffin.  I used some coffee stirrers to represent the splintered remains of the treasured relic's box and then it was on to the painting. 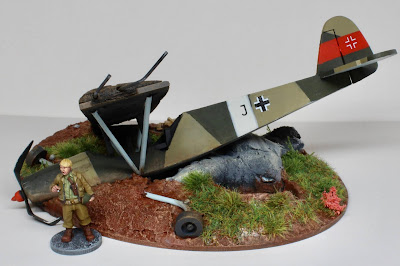 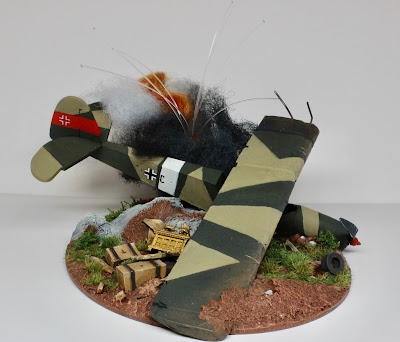 A relatively straightforward paint job in the end and although a little small I used some of the transfers that had been left over from the vehicle kits that we had built, there were even some German Afrika Korps logos to emblazon the scattered cargo, a nod to the adventures of a certain Dr. Jones perhaps? 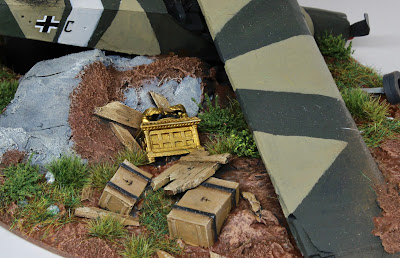 So pleased to finish this and can't thank James enough for his contributions to make it happen.  This is another one of those elements that I am really looking forward to seeing on the completed boards when we finally get a chance to have everything assembled and in one place. 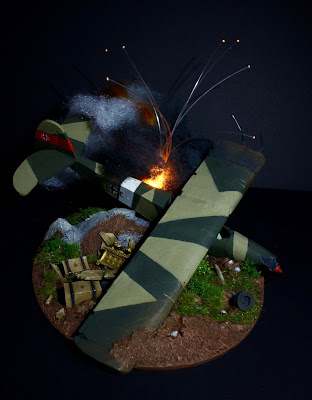 A final atmospheric shot of the Storch still burning at night, showing the fibre optic elements of the blast markers, thank you again Dave Docherty for the inspirational idea!