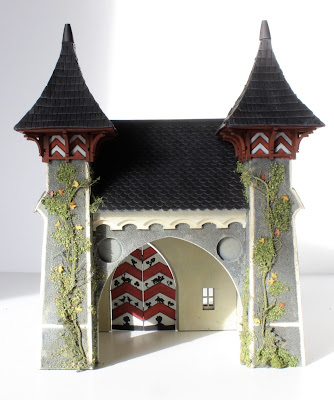 I have been looking forward to publishing this post for a while now, and must apologise to James for taking so long to realise it, but I am now delighted to reveal the Gatehouse to Schloss Itter!  I would usually show some work in progress shots for a build like this, but have decided not to on this occasion.  The reason being, I feel it only right and proper that James shows you how he went about designing and constructing what, to my mind anyway, is his best design yet. (A link to James' post is at the bottom of this page.) 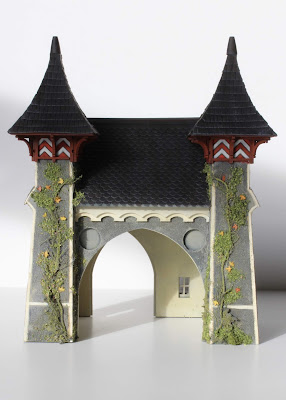 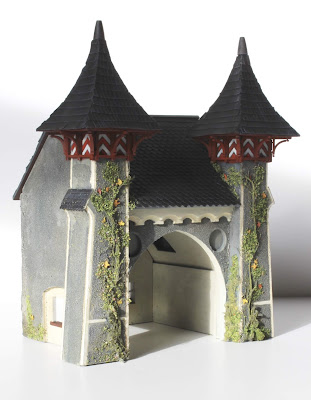 Castle Itter's Gatehouse is a little architectural gem in its own right, a piece of Gothic whimsey with fairytale turrets and an arched central entryway.  Besotten Jenny, the Sherman M4A3E8, would guard this entrance point having reversed in to position.  Its main turret and .50-Cal. machine gun trained on the narrow access road that led to the town.  Meanwhile one of Jenny's .30-Cal. machine guns was redeployed in the cramped loft room of the Gatehouse, ably manned by Worsham and McHaley. 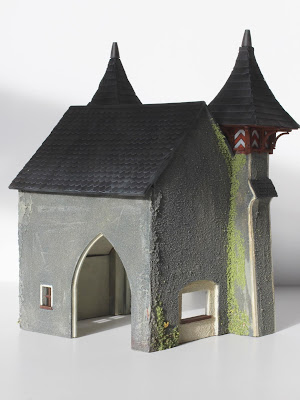 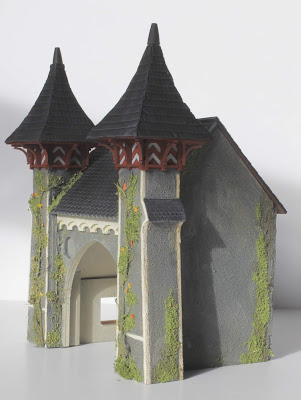 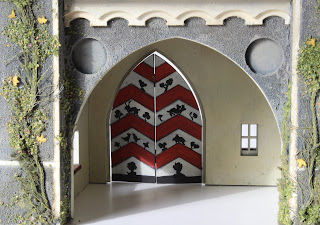 Working again from only photographs James drew out the design on the computer and so started the now customary process of adaptation as the design went through a number of revisions, each one addressing a different problem or creating a facet in a more appealing way.  It became apparent, quite early on, that this particular piece had really caught James' imagination.  His attention to detail now operating at such a level that saw the intricate tower woodwork realised along with two different types of tiles, a detail clearly visible in the original source material. 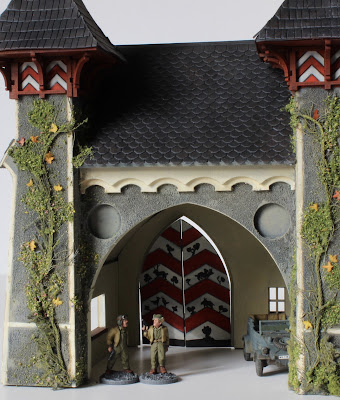 As we broke for the half term, James had already built, tiled and applied paint to his model before very kindly starting the assembly of a second.  If truth be told we don't need two, but I just could not pass up the opportunity to work on this delightful kit and have finally got mine to a place where I am happy to share my efforts. 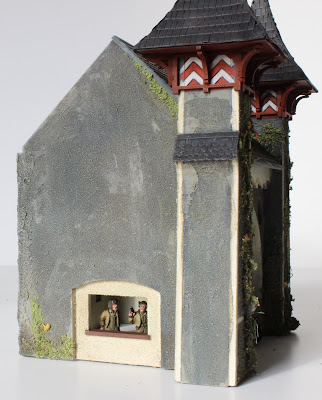 As with the previous hall piece the texture was achieved by using play sand, this time sprinkled on to a PVA base to give a slightly lighter texture.  Very little was needed in the way of construction, just some card stock and lashings of PVA glue to stick down the laser cut tile strips, such was the quality of James' design.  Once undercoated colour was applied with successive layers of dry brushing, before picking out the details with a brush. 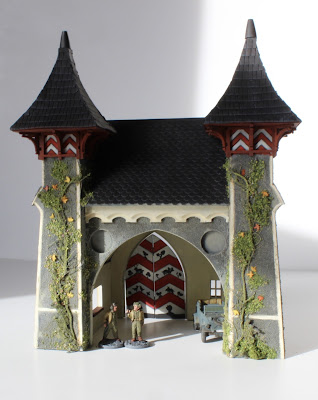 We had found some rather good photographs of the original building showing climbing plants festooning the sides of the towers and I was keen to give this a go.  I had found an example on the always helpful 'Terragenesis' website that had used something called eyelash yarn.  Not having heard of this myself, I popped into Sunshine Coast's mighty metropolis and spent a few minutes perusing the aisles of C & H fabrics.  Sure enough I found a couple of likely candidates, although I notice that in Blighty we refer to the yarn as Fur Wool. 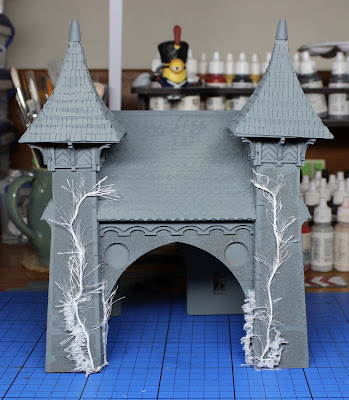 I was delighted with the result, which helped to convey that feeling of nature starting to take hold of a once celebrated structure. 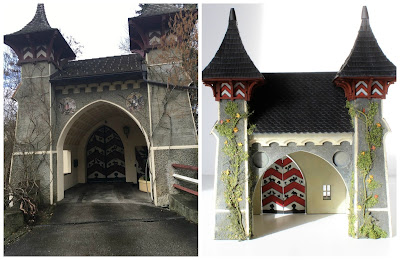 With James having gone to the trouble of designing the loft behind a removable roof panel it seemed a shame not to populate it with a suitable representation of Worsham and McHaley, ordered up from 'Artizan Designs'. 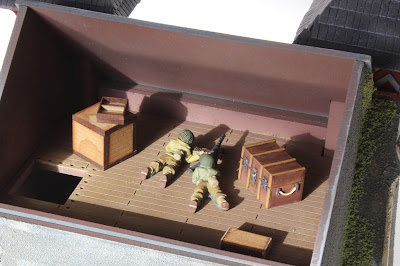 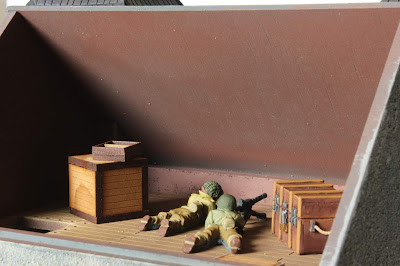 Another wonderful addition to our ongoing project, which continues to move on apace.  James continues to delight with his designing skills and I am very much looking forward to working on the terrain boards on our return to school, but in the interim more miniatures need to be painted!

Please visit James' Blog to see how the Gatehouse was created:


Schloss Itter: The Gatehouse design
Posted by Michael Awdry at 11:00