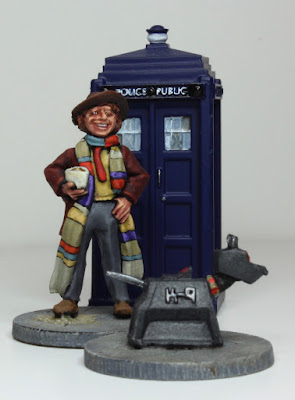 Tom Baker, as the fourth incarnation of the alien Time Lord from the planet Gallifrey, was my Doctor. His tenure, lasting longer than any other, ran from 1974 - 1981, was just when young Master Awdry was starting to take an interest in all things Science Fiction. Whilst I wouldn't call myself the most die hard of Whovians, the series did, and still does, hold a special place in my heart. So when it came to conjuring up ideas for the 'Childhood' round, of the 'VIII Annual Analogue Hobbies Painting Challenge', I found myself instantly transported back in space and time. 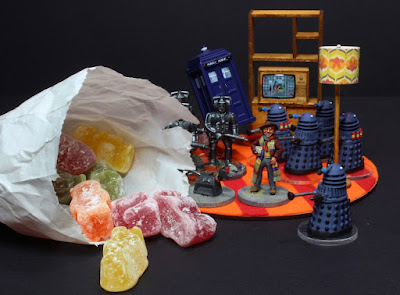 There is a misconception that we spent the 70s hiding behind the settee, fearful of the monsters that sprang fourth from our television sets, but not I, I would rather be sat, front and centre, best placed to deal with whatever befell the Doctor and I.  This was the premise that I built my submission around and fortunately I had been quietly taking advantage of 'Black Tree Designs' regular sales to build up a small collection of Time Lords. 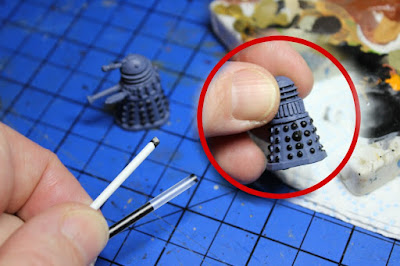 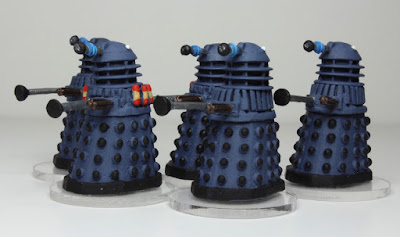 With the Doctor and his robotic companion K-9 completed my attention turned to the most iconic of the Time Lord's adversaries, the Daleks!  Relatively simple in principle, I had been advised that using a small tube dipped into paint would speed the process up no end.  Sadly for me, the innards of a Bic biro proved just a little too wide in diameter, but some styrene tubing proved more suitable and so the initial setback was soon forgotten as I raced on to the Cybermen. 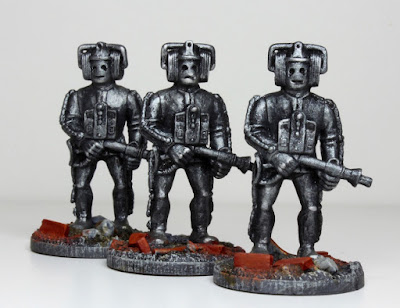 I knew that I wanted to allude to this being an important moment in my childhood and eventually hit upon the idea of having the Time Lord beaming into the front room from the television set.  Ready made doll's house furniture was proving a dead end, either too expensive or just not the right style, but fortunately I happened upon Jane Harrop's retro kits.  I chose a couple of pieces of furniture and an iconic Decca television in 1/24 scale to 'sell' the idea that the miniatures had emanated from the screen.

The kits themselves are exquisite in their detail and the materials used, a real treat to assemble although fiddly in places - I even had to glue the buttons on to the television! 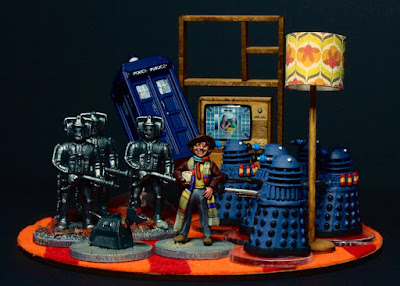 Once completed the miniatures were suitably arranged on a 'Warbases' disc that I had covered in strips of felt to add to the lurid colour scheme of the decade and all was set, just in time, to sit back and enjoy another piece of surgery confectionary! 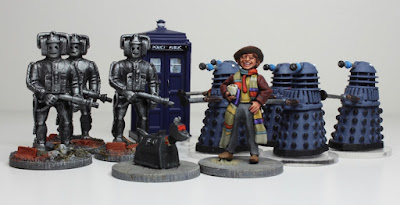 I am claiming a square on my Bingo card with this post: 'Paint a model for an army that you don't already collect and play'.

Also added to the 'Command Stand' page.
Posted by Michael Awdry at 08:00

Email ThisBlogThis!Share to TwitterShare to FacebookShare to Pinterest
Labels: 28mm Distractions, Dr. Who