It's a Jungle out there! 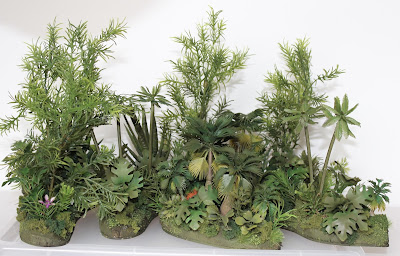 Well I have to confess that I know not where August has gone? One minute I am hosting my first ever 'proper' war game and the next I'm starting to think about dusting off the satchel in readiness for the new academic year! Now don't get me wrong there are no complaints here as I have had a fabulous week exploring dungeons and monster invested caverns through my newly arrived Kickstarter, 'Massive Darkness'. More recently, with the release of the A-levels here in the UK, I have been devoting some much needed time to the day job, but all this has conspired to keep from my plan of sharing a series of posts detailing the terrain build for the game, not to mention restricting the time available to perusing the many splendid weblogs that I so enjoy reading. So, as we edge towards another weekend, I think it is only fair to have a little me time?


One of the key requirements for Congo is specific terrain, whether that be for the jungle or savanna expeditions, that can either be explored by your intrepid adventurers or restrict their movements by blocking their progress and line of sight.  Having selected a jungle based scenario for our first encounter I found myself reaching for the bits bag only to discover a selection of rather diminutive palm trees, abandoned from a previous adventure - more thought was going to be required!

As has become the norm in such circumstances the noble art of Google Fu came to my rescue and before long I was thrilled to discover two particularly fine examples of jungle terrain building that would ultimately inspire me to complete my own.  The first was that of the '1000 FOOT GENERAL', entitled, 'Making Jungle Terrain'.  John's tutorial is absolutely superb and it would be foolhardy of me to repeat it here, blow by blow.  Instead I would encourage you to visit John's weblog yourself and I will simply restrict myself to detailing some of the subtle differences that I employed for my own build. 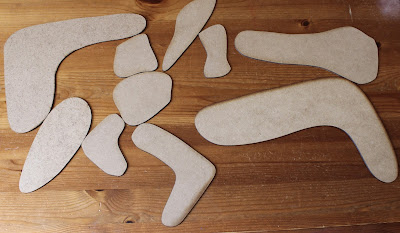 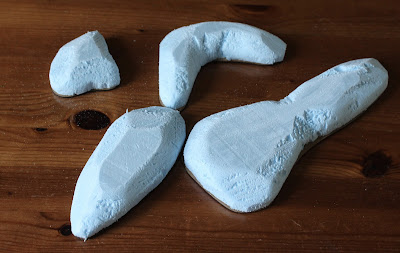 The first of those differences was that I based my blocking terrain on some MDF shapes, sourced though the ever reliable Tony at 'East Riding Miniatures'.  This was a pre-cut bag of shapes that I simply stuck chunks of blue foam to.  The edges were then contoured and sanded just as John had instructed me to do.  Once primed and painted, do avoid aerosol spray paints at this stage, it was time to add the foliage. 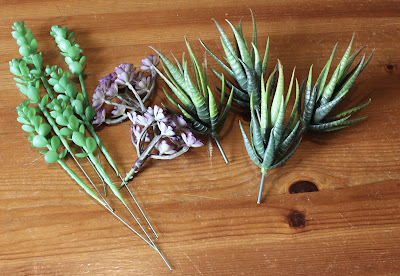 Because the blocking terrain was now raised, the rather pathetically small palm trees that I had previously purchased were now back in the mix, but I was going to need more variety in both size and species.  There are now a good many posts detailing the surprising versatility of plastic model trees from China.  I, myself, have benefited from the seemingly implausible business model of shipping out relatively small units free of any postage charge from far flung corners of the globe, but they do and, if you are prepared to wait a couple of weeks, then they prove an invaluable starting point for any arboreal activities.  Having bagged a couple of likely candidates I remembered a post on the very entertaining 'Colgar6 and the Infinite Legion of Toy Soldiers' blog where Colgar6 had bought and used a plastic Bonsai tree for one of his terrain builds.  This inspired me to widen my search a little and I stumbled across some plastic houseplants, as opposed to model trees.   The dimensions listed suggested that they might be suitable and because they were primarily to be used for the blocking terrain I thought it was worth the risk for the princely sum of £12. 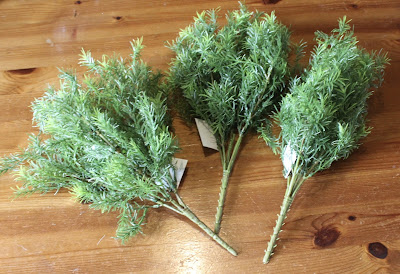 Having picked up some other bits and pieces, but more of those in the next instalment, I was aware that I needed more height and so went in search of trees.  The cost of wargame specific trees has long perplexed me, I once purchased a rather splendid mature oak from '4Ground' and whilst a lovely tree, and very much the pride of my forest*, I could never afford to cover the table with them.  So off I went in search of suitable material to build my own and before long I found myself perusing the visual aisles of 'The Artificial Flower Shop'.**  Again not really knowing what I was buying I narrowed my search to shape and size, plumping for three artificial Springeri Bushes at £7.80 each, the combined cost of which was the same as my Mighty Oak!  When they arrived I was delighted to find that I could break each 'bush' down into a further four trees - splendid news!
*Not a phrase that I use often!
**I really need to get out more! 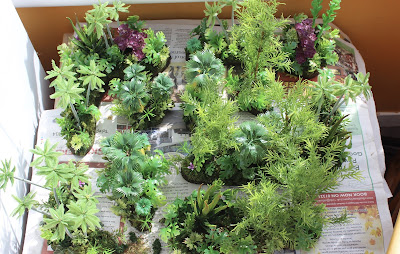 Having assembled the stands according to the John's tutorial, I gave everything a generous spray of watered down PVA in a bid to help secure the clump foliage and flock.  Once dry I was relatively pleased with the stands, but the garish green of the coloured plastic rather spoilt the effect that I was after.  Of course in John's tutorial he goes to great length demonstrating how he dealt with this very issue by painting the individual pieces before assembly.  Now being inherently lazy I had skipped this all important step, which is why John's stands look like a jungle and mine looked like a mass of plastic plants!  Unperturbed, I set about fixing the issue with a can of Tamiya Colour Olive Green and a couple of passes with the trusty airbrush loaded with Vallejo Model Air Interior Green, followed by Cam. Light Green.  Whilst perhaps not as neat as John's it certainly seemed to do the trick and a final spray with the matt varnish brought the group together - ta-da! 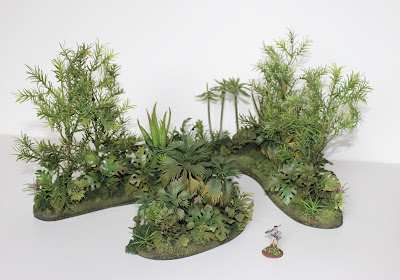 So a huge thank you and well done to John of the '1000 FOOT GENERAL', your tutorial was not only inspiring, but early to follow too!  Next up will be the explorable terrain and again another link to a fabulous tutorial. 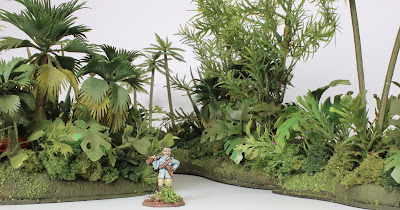 As an addendum to this post, I thought it just worth mentioning the wonderful 'Deep Cut Studio' mat that underpins my jungle.  This is their swamp design that the chaps very kindly cut to 3'x4' for me.  Made from mousemat material, it doesn't crease and can be stored rolled up.  They might not be the cheapest mats out there, but the quality is superb and the chaps are a delight to deal with. 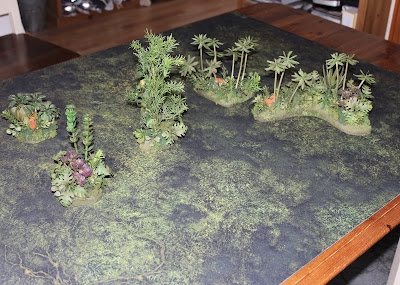 I had made quite a sizeable order, with a couple of mats purchased on behalf of the school, and was thrilled when I given storage cases and some terrain pieces free!  The most useful of these are the river sections that are made of the same material as the mat itself. 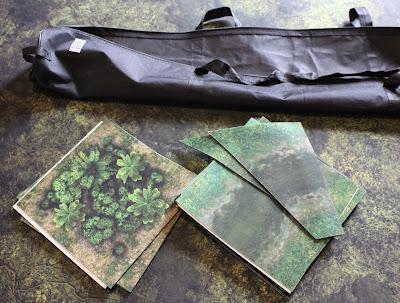 They can be simply laid out to give the impression of a river and I think work rather well, so well in fact that I had to dig out the old steam launch to give her a run out through the steaming jungle!  So another thank you extended to 'Deep Cut Studio', fabulous products and amazing customer service. 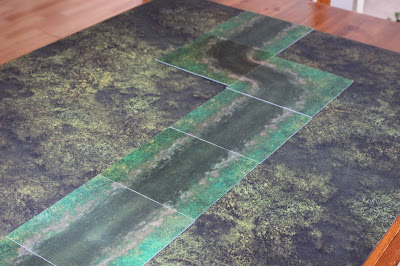 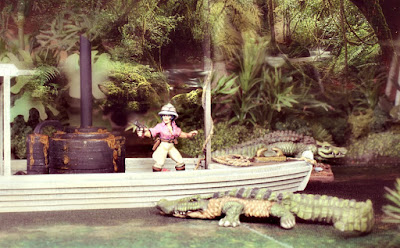 Finally the seller that I purchased the plants from, via Ebay, was Alex-wqt and they were listed as follows:
Posted by Michael Awdry at 13:15