The Tale of 3 Painters begins. 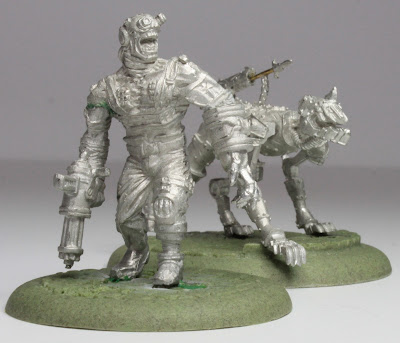 Just the briefest of posts to 'kick off' my leg of 'A Tale of 3 Painters' charity challenge.  Yesterday I received my allocated miniatures in the post form 'The Dark Templar', the evil mastermind behind the project!  Already assembled and based by Mike, all I need to do is clean up a few lines and get on and paint the beasties!

So what did I get?

Ryle and a Hunter!  This means almost nothing to me, so before I get much further I need to get my head around what exactly the 'Malifaux' universe is all about.

Based in an alternate Earth, Malifaux uses gothic, steampunk, Victorian horror with a dose of the wild west to inject fun and depth into the magical lawlessness of a world rife with monsters, necropunks, man-machine hybrids, gunslingers, and power-hungry politicos. Actively using character-driven stories to define the world of Malifaux, seek your fortune in this fast-paced and brutal 32mm tabletop miniature skirmish game. Assemble your crew and stake your claim!

Well that all sounds encouraging enough and includes a few themes that I'm familiar with and plenty more that I will thoroughly enjoy researching into, but who on earth are Ryle and the Hunter? 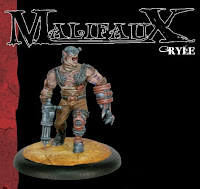 Ryle is Hoffman's brother, (Hoffman heads up the new 'Flesh-Construct Grafting Illegality Division'; keep up everybody!) and has gone through some severe changes since arriving in Malifaux.  Ryle, desperate for a treatment for his polio, was left helpless when Breach Psychosis grabbed hold and ravaged his body. Only through the quick intervention of Dr. Viktor Ramos did Ryle survive - but as more machine than man, armed with a Gatling Gun to vaporise the enemy, peachy! 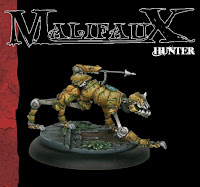 "The Hunter stalks its prey like a feline predator from the wilds. It has a penchant to wait in ambush and pounce on its unwary prey. With a vicious chain spear, it can pull its reluctant targets into its eager, flurrying claws."  That is one cat you don't want to meet in a dark alley then!

Mike has given us a free reign to interpret the miniatures as we see fit (he may live to regret that decision!) with the only consideration that we try and incorporate 'Guild' red, but who on earth were the Guild again?  The idea is that we try to post progress reports to keep the momentum rolling so please continue to lend your support to the project.  Don't forget to keep up to date with the others as well, Andy Walker at 'The Lair of the Breviks' and of course 'The Dark Templar' himself, Mike Reynolds.

Email ThisBlogThis!Share to TwitterShare to FacebookShare to Pinterest
Labels: 28mm Distractions, A Tale of 3 Painters, Housekeeping