Who knows where my next distraction will come from as this post will surely illustrate.  Some will remember the dubiously entitled post 'a beer and a bag' where I was given the most bizarre mix of miniatures you could ever imagine, one of which was a crocodile like creature and I immediately envisaged building a wonderful terrain piece reminiscent of the rope bridge scene from 'Indiana Jones and the Temple of Doom'.  (I even went as far a ordering up some additional crocodiles and vultures!)  It wasn't until the 'Laughing Ferret' (his tremendous blog can be found here.) pointed out that the said beastie was in fact a gator that stirrings of a possible project began. 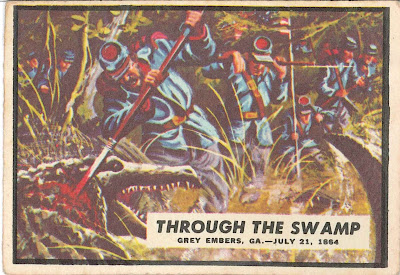 Many, many years ago I was presented with a set of trading cards depicting scenes from the American Civil War.  This gift from my father left such an impression on my young mind as the illustrations were incredibly violent but brilliantly presented, full of dynamic composition and colour.  On the reverse of each card was a news report relaying was happening in the war at any particular juncture.  Some cards left more of an impression than others but I had a very vivid memory of one with a gator in it.  Sure enough after several hours of scrambling around the dirty loft space at 'Awdry Towers' the collection was unearthed and to my joy and delight 'Through the Swamp' was there, just as I remembered it!
Well that I was it, I now had to recreate this scene using my Gator!  Phase 1 is now complete in that I have found a suitably large base and painted up Mr. Alligator here.  He looks far too happy, observed the  saintly Mrs. Awdry, but that is probably because he knows that he is going to be able to get his teeth into some Union Boys before too long! 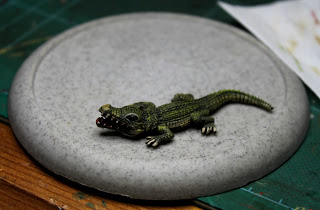 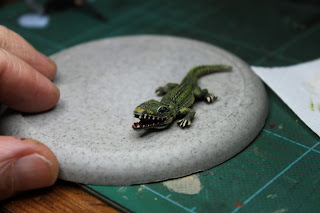 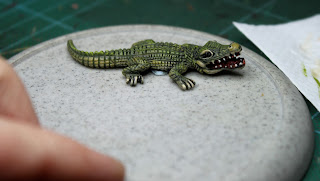 Just as an aside does anyone know if the red top the soldiers' kepis is accurate or is it just an artistic device?