At my signal, unleash hell! 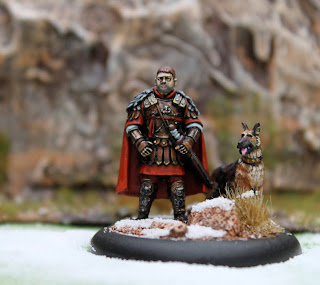 Now clearly this miniature has nothing to do with Victorian Warfare but I'd recently got around to reading Conn Iggulden's 'Gates of Rome', the opening story in the much acclaimed 'Emperor' series, and instantly wanted to paint a Roman figure.  When I came across this little gem by Warlord Games I just had to have it! Originally titled,

it is obviously based on the Russell Crowe's character, Maximus from Ridley Scott's superb 2000 masterpiece, 'Gladiator'.

I know very little about Roman Army uniforms, armour and the the like so I apologise for any glaring errors but this was an unashamed distraction from the project proper and great fun too.  Who knows where this might lead, perhaps there will be a 28mm Roman Warfare!  It did bring about a couple of firsts for me in the way of scenic effects and painting.  With regards to scenic effects this was the first time that i had tried to use snow  I have been desperate to try this having seen MiniMike's wonderful  'snow basing tutorial'  and Finnish troops here.  They really are wonderful and well worth a look.  I managed to pick up some Army Painter snow and whilst it did the job, ultimately I felt it lacked a little something.  The other first was attempting to represent stubble on the figure.  Again something I've seen other painter's do well so using a little watered down grey paint I tried to emulate Russell's five o'clock shadow.  Not unsatisfied with the result but as Gavin pointed out at the Gentlemens Wargames Parlour, I perhaps needed to go a little higher up the cheekbone. 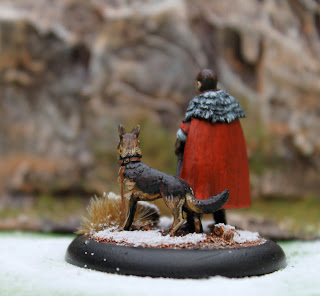